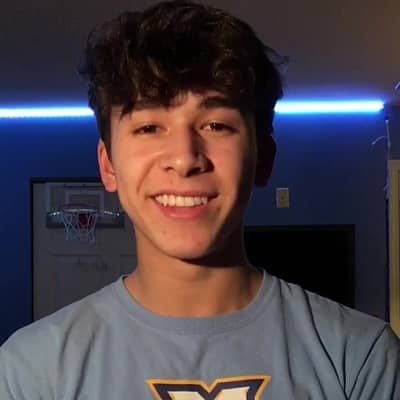 Until now, he has not addressed anything regarding his love life. Additionally, he is also never caught dating anyone yet.

So, we can say that he may be more focused on building his career right now or he may be not disclosing about his relationship in media.

Threedotcorey is an American social media star. He is a transition and comedy video creator on TikTok.

He is known for uploading different dance, lip-syncs, and funny videos on his account. As of now, he has earned more than 4.5 million fans in his TikTok account.

The star seems to be very close to his sister, Chanell Whelan. He has post different photos and videos with her in his social media accounts.

His father’s and mother’s name aren’t disclosed. He belongs to American nationality and is of Ireland and English ethnicity.

Talking about his education, no information can be collected.

Threedotcorey is a teenage social media influencer. He began uploading content to TikTok in April of 2019. And in a short span of time, he became one of the fastest-growing personalities on the video-sharing platform.

He uploads various kinds of videos, including funny, prank, lip-syncs, and transition videos.

Corey makes different videos collaborating with his friend Micahcow. He is also a TikTok star who runs the account ‘Csquad.’ Corey Whelan and Micahcow regularly appear on each other’s videos. A transition video with Micahcow has been watched over 20 million times with more than three million likes.

Most of his videos contain the ‘original sound by Fyler Tunke,’ which is also very popular among other TikTok stars like Micahcow, Charli D’Amelio, Mattia, and Griffin Johnson.

In one of his first viral TikTok videos, he is seen climbing on top of a basketball hoop. The video has a caption, “New challenge, climb something and #hitthewoahonbeat”. It earns approximately 200,000 likes.

In his recent videos, Corey also appears along with his sister Channel. On his videos, he was helping her with various tips and teaching her things like performing a backflip. She has now started making transition videos on her own learning from his brother.

She is one of the rising stars in the social media platform, yet his net worth is under review.

Regarding his salary, his income is around 18K.

He hasn’t been in an incident that could create any rumors about him. The star is also far from being in any controversy until now.

Threedotcorey has a physically good built body standing with a height of 5 ft 7 inches (177cm). Likely, his weight is 58 kg. He has black colored hair and eyes.

Furthermore, he has his own YouTube channel with over 9K subscribers. But he hasn’t uploaded any videos on Youtube yet.

Likely, he doesn’t seem to be active on Facebook.

Also, get to know about Vinnie Hacker, Brodie Smith, and Sophie Fergi.