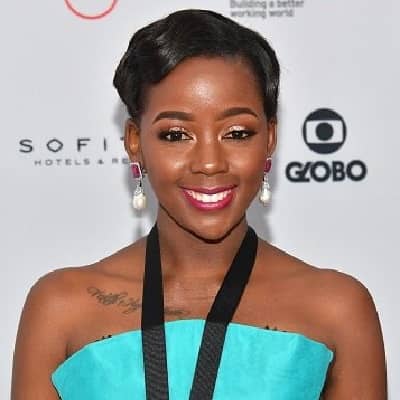 Mbedu is living her single life and isn’t engaged with anyone in a romantic way.

However, before Dr. Musa Mthombeni and Mbedu were speculated to be dating. It later came as false news when Mbedu clarified that they were only friends.

Who is Thuso Mbedu?

Thuso Mbedu is an Emmy nominated South African actress. She was nominated for her role in the telenovela Is’Thunzi.

Mbedu was born on 8th of July 1991 in Pietermaritzburg, Kwa-Zulu Natal, South Africa.

Her parents passed away at an early age. After that, she was raised by her grandmother who was her legal guardian.

She has a sister name Masentle Noma Lungelo Mbedu.

Mbedu finished her scholing from Pietermaritzburg Girls’ High School. She studied Physical Theatre and Performing Arts Management at the University of the Witwatersrand (Wits).

Then in 2012, she attended the Stella Adler Studio of Acting in New York City, US

Mbedu was into acting since she was a teenager. She debuted into acting when she was just studying in 10th grade.

Struggling in various roles, she finally landed a small role in the second season of the Mzansi Magic soapie Isibaya in 2014.  She also had a guest role in SABC 2 teen drama series Snake Park’s second series.

Being jobless for over six months, she appeared in the teen drama series Is‘thunzi’ in 2016.

She made her international debut from the Amazon Video historical limited series The Underground Railroad. It was produced by Barry Jenkins, who is an Academy Award winner.

Recently, in April 2021, it was announced that she will be starring in The Woman King alongside Viola Davis.

The actress won the SAFTA Golden Horn Award for Best Actress in the TV Drama, Is ‘Thunzi in 2018. The same year, Mbedu receives Forbes Africa 30 under 30.

The actress has amassed a net worth of around $1 million to $5 million.

She earns from acting, modeling, and various commercial works. Her earning details are unknown although.

There were various rumors of Dr. Musa Mthombeni and Mbedu being in a relationship. However, she came up to the media and clarify that they are just good friends.

Mbedu has a perfect figure with a measurement of 32-25-36 inches. She has an average height of 5 ft and 4 inches. Likely the actress weighs around 5o kg.

She has black colored hair and eyes.