Updated On November 24, 2022 | Published By: pritishma pradhanang
Share this
Married 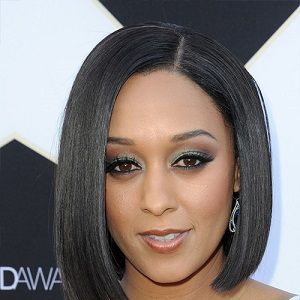 I think that you may find that Tamera's a little more vibrant and energetic, but I'm much more likely to go up to a person and say, "Hi, I'm Tia, nice to meet you". Whereas Tamera is like...well ...she's a little shy. She's down to earth. I'm more extroverted and she's more introverted when meeting people. Even with a fan I'll be like, "Hi! How are you! How are ya doing?" and Tamera's in the back thinking, "Let's see if this person's okay, then I'll come". That's how she is. I take the first step

On becoming a mother: I never knew how much love I could feel for someone. I feel that my life has now just begun.

The prominent actress Tia Mowry, is a married woman. She tied the knot with Cory Hardrict on 20th April 2008.

The couple is blessed with two children i.e, a son, Cree Taylor Hardrict who was born on 28 June 2011 after a lot of struggle to conceive she became pregnant.

Recently on 5th May 2018, she had her second baby, a daughter named Cairo Tiahna Hardrict.

But there is no issue of separation between the blessed couple. Their relationship is depending on mutual trust and understanding. They both are loyal to each other.

Who is Tia Mowry?

Tia Mowry is an actress. Her full name is Tia Dashon Mowry. She is famous for her teen role as Tia Landry in the sitcom Sister, Sister.

She had even appeared as medical student Melanie Barnett in the comedy-drama series The Game and the television movie Twitches and its sequel Twitches Too. Mowry has voiced Sasha in Bratz.

Furthermore, she along with her sister Tamera was in a singing group.

She was born on 6th July 1978 in Gelnhausen, West Germany, the daughter of Darlene Renée Mowry (mother) and Timothy John Mowry (father).

Her mother worked as a security guard whereas her father was in the U.S. Army at the time of her birth, and later became a custody officer/jailer with the City of Glendale Police Department.

She belongs to the American nationality and her ethnicity is Irish ancestry as well as Afro-Bahamian descent.

Additionally, she has three siblings named Tamera Mowry, Tavior Mowry, and Tahj Mowry. Besides this, there is no information regarding her education.

She had even appeared in the Rob Schneider comedy film The Hot Chick, playing cheerleader along with her sister. Then she did voiceovers for the Bratz cartoon series as the voice of Sasha.

She had  Disney Channel Original Movie Twitches, reprised their roles in its sequel, Twitches Too, and co-starred in the 2000 movie Seventeen Again along with her sister in 2000.

Then she starred in an episode of her sister’s television show, Strong Medicine, playing the role of Keisha in 2006.

She published her first book, Oh, Baby: Pregnancy Tales and Advice from One Hot Mama to Another in 2012. She had stated via her Twitter account that she would not be returning to The Game, for the sixth season in the same year.

Similarly, she starred in her Cooking Channel series Tia Mowry at Home where she makes everything from macaroni and cheese, to cake, and various types of cocktails in 2015.

The next year (2016), she started a podcast on PodcastOne called Mostly Mom with Tia Mowry.

So far, she has been nominated for a Teen Choice Award and an NAACP Image Award for best actress in a comedy.

There was a rumor that she had posted and deleted a tweet slamming an unspecified person for talking about liking a married man during an interview.

She has dark blonde hair and sparkling dark brown eyes.

Tia Mowry after struggles of pregnancy did not give up and now she gave birth to her second child, and says, ‘We are in heaven’