Posted by MarriedBiography Posted on May 5, 2020 | In Child , Married , Relationship
Share this 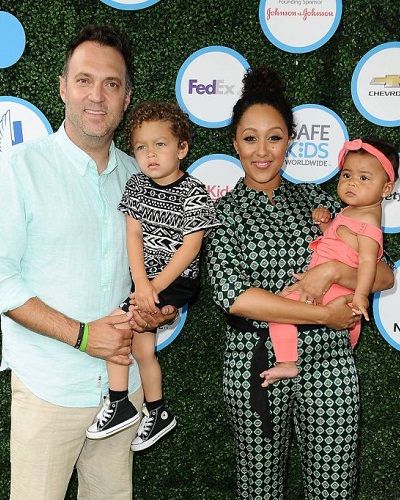 Some people want a big family but actress Tia Mowry has realized during this quarantine that she is happy with her two kids Cree Hardrict and Cairo Tiahna Hardrict. The actress decided that she changed her mind about adding another baby to her and her husband Cory Hardrict.

“I no longer need therapy [to make a decision about baby No. 3],”

At present, she is stuck at home amid the COVID-19 outbreak. She is with her children. Similarly, she added,

“Cree goes to school and then after that, I’ll let the kids get on their iPads. I’m not the type of mom that’s like, ‘No iPads during this quarantine.’ I mean, really, what [else] are you going to do?”

When she was asked about welcoming another child in her family. She revealed that she is not planning to. Even though she loves being a parent to her children Cree and Cairo, she seems like she is done having another kid. She is happy with her two children.

Tia Mowry and Cory Hardrict met each other when he was working odd jobs in Los Angeles, while she was just coming off the success of Sister, Sister on ABC. They dated for six years before the couple got engaged on Christmas Day, 2006.

Likewise, their 30-minute outdoor ceremony was followed by a Midsummer Night Dream-style reception in the hotel’s ballroom. The wedding cake was four-tiered vanilla and red velvet cake by Cake Divas. Also, guests danced to the tunes of DJ Michael Hayes.

Also read Whose wedding did Hoda Kotb officiated during quaratine? Know about Hoda’s fiance and net worth

The estimated net worth of Tia is around $4 million. She has appeared in many commercials and guest-starred on shows Full House. Likewise, she has also had recurring roles on the TV series Rosewood in 2016, Mistresses in 2016, Nicky, Ricky, Dicky & Dawn in 2017, and Me, Myself and I in 2017.

Also read How did Gymnast Laurie Hernandez got abused by coach Maggie Haney? Find her net worth

Tia Mowry is an actress. Her full name is Tia Dashon Mowry. She is famous for her teen roles as Tia Landry in the sitcom Sister, Sister. She had even appeared as medical student Melanie Barnett in the comedy-drama series The Game and the television movie Twitches and its sequel Twitches Too. Mowry has voiced Sasha in Bratz.

Furthermore, she along with her sister Tamera were in a singing group. Read more bio…

Kristen Doute has a new boyfriend, Alex Menache! How did they meet?
Tags : Actress Sister