Tiffany Hendra is a Television sensation, Youtuber, and actress.

Tiffany Hendra is happily married to her husband Aaron Hendra. He is an Australian rock musician and was a former band member of OCEANIC.

He is also a remarkable humanitarian who actively takes part in aid to the South Sudan Orphanage, and Angels of East Africa along with his wife.

Aaron Hendra taped the song “One Man’s War” for the cause. The couple tied the knot on 11 February 2004. They’ve been married for fifteen years but they’ve not been born a child yet. 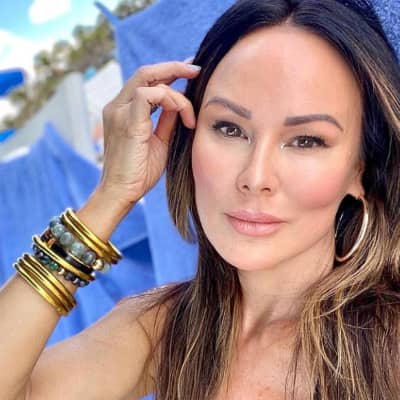 Who is Tiffany Hendra?

Tiffany Hendra is a Television sensation, Youtuber, and actress. She is well-known for her appearance in the Bravo reality television show ‘The Real Housewives of Dallas’.

Tiffany Hendra, the real name Tiffany Rochelle Bolton, was born on 21 August 1971. She was raised in Channelview, Texas, a Houston suburb so she holds American nationality.

Likewise, Tiffany Hendra comes from a mixed ethnic background of Cherokee, Chickasaw, Czechoslovakian, and Japanese. As of 2022, she will be 51 years old and she falls under the zodiac sign of Leo.

Speaking of her family, the name and details of her parents are not given as of yet. But, she has a younger sister named Natalie Bolton. She was ranked fourth in Survivor: Micronesia – Fans vs. Favorites.

It seems Tiffany Hendra was brought up in a loving and caring household and has a good relationship with her parents as she shares pictures of them on her social media.

As for her educational background, the information on the school and university she attended are not given as of now. She must have completed her studies considering her age unless she decided to drop out and focus on her career.

Tiffany Hendra is famous for her performance on the Bravo reality television show ‘The Real Housewives of Dallas’. She initially began her career journey as a fashion model throughout Europe and the US.

Her television career began after she co-hosted on the talk show ‘The X Show’ on the FX channel and on the season of the comedy TV show ‘Beat The Geeks’ which aired in 2001 and 2002. She had a recurring role on NBC’s ‘Spy TV’ and also was cast in the Cinemax erotic-drama series ‘Black Tie Nights’.

Tiffany has participated on Oprah’s OWN Network, ‘Your OWN Show’. She was placed in one of the twenty finalists for the reality series. In this series, she directed her show idea directly to Mark Burnett, Executive Producer of Survivor and The Apprentice.

Further, she has her own Youtube channel named ‘Tiffany Hendra’. She started her youtube journey on 8 May 2008 but she uploaded her first video in 2010 captioned “MY VERY 1st YOUTUBE VIDEO! THRIFTSTORE SCORE: DEAL OF THE CENTURY….”.
Till now she has gained more than 2m views. The contents she posts are related to fashion, make-up, health, vlogs, styles, shopping, spiritual growth, etc.

Tiffany Hendra owns a Youtube web series called ‘Sanctuary of Style’. In this series, she mostly shares her knowledge related to fashion and beauty.

She has 20 years of experience as an international model in the fashion and beauty industry. Tiffany is utilizing her on-screen knowledge and social media fame to educate and empower young women through this series. She shares her experience, fashion tips, beauty hacks, wellness, and fitness content in it.

Furthermore, Tiffany Hendra also leads future vloggers and bloggers to improve their camera skills. Recently, her blog and web series were chosen to be highlighted by the Laughing Cow’s, Live A Life Well Laughed Campaign and it raised funds for local health and wellness initiatives.

Tiffany Hendra earns a pretty decent amount of money from her profession. She has a net worth evaluation of around $1.9 million.

Her main source of revenue is her profession as an actress, Television personality as well as Youtube career.

Tiffany Hendra is not a controversial personality. She has never been included in any kind of scandalous news.

Even in the RHOD show, she wasn’t the type to be involved in any rumors. She is very careful and keeps her personal and professional life separate.

Tiffany Hendra stands tall at the height of 67 inches (5 ft 7 inches) and weighs 58 kg. The size of her chest-waist-hips is 34-25-35 inches respectively. She wears a bra size of 34A. Further, she has a pair of dark brown eyes and long black hair.

Tiffany Hendra is active on all her social media platforms. On Instagram, she is present under her name ‘@tiffanyhendra‘ and has garnered 74.5k followers.

She is also available on Twitter as ‘@TiffanyHendra‘ with more than 26.8k followers. As for Tiktok, she goes by the name ‘@tiffanyhendra‘ and has 34k followers.

Tiffany Hendra also has a Youtube channel named ‘Tiffany Hendra‘ with over 23k subscribers. Further, she has provided her website ‘tiffanyhendra.com‘ for any queries.