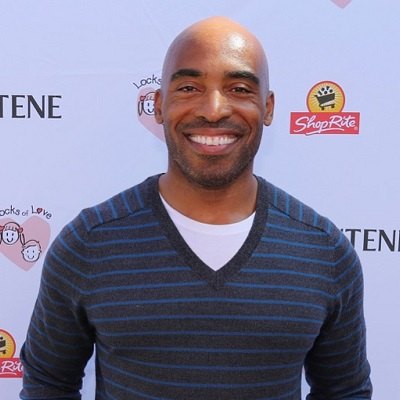 Every day is an opportunity disguised as a challenge

People go through life and make personal decisions and sometimes they don't work out. I won't be the first person to be divorced

You get held to a high standard, almost an unmaintainable standard, in the public eye that you don't even come close to touching.

What is the relationship of Tiki Barber?

Tiki Barber is married to Traci Lynn Johnson. They exchanged vows on the 20th of July 2012 in New York Courtroom in a simplistic manner.

They first met in when he worked on the Today Show. At the time, Johnson was an intern for NBC.

Previously, Tiki was married to Virginia Cha Barber. The former couple happens to be a university lovebirds who ended up marrying each other. The wedding took place on the 15th of May 1999. His ex-wife, Virginia is a fashion designer by profession.

When Virginia was seven months pregnant with Tiki’s twin daughters. They announced that they are going to end 11 years of marriage via divorce. In July 2012, they got divorced from each other.

Who is Tiki Barber?

Tiki Barber is a retired football player, media, and business personality. He is renowned as a former running-back of the New York Giants.

Currently, he is the co-founder and chairman of the online market, Thuzio.

Tiki Barber was born on the 7th of April 1975 in Roanoke, Virginia. As of 2021, he is 46 years old. His birth name is Atiim Kiambu Barber. He is of British-Italian-Spanish ethnicity.

His father, James Barber was a football player. Also, he used to play for the NFL too. His father and mother, Geraldine Barber were separated from each other via divorce when he was young.

He happens to be the second among his two brothers; Tarik and Ronde Barber. Also, he shares the same birthdate with his twin brother, Ronde.

After the divorce, his mother raised him and his siblings as single mothers. For that, she would take two to three jobs to support them. Whereas his father never shared the burden. Also, James never looked at them when they were growing.

Talking about his educational background, he graduated from the University of Virginia with Honors in Commerce. He attended the University on an academic scholarship. Hence, he always tried to focus on his studies.

In 1997, New York Giants drafted him in the 2nd round of 1997 NFL Draft. Later, Tiki Barber began his career in a mediocre rookie campaign. He finished the campaign with 511 yards and 3 touchdowns.

In 2000, he signed a six-year contract with New York Giants. In 2001, he represented NFC in Super Bowl XXXV. The following year, he exploded 203 yards against Philadelphia Eagles making him one of the best defenses in the league.

In 2004, he reached his career highest with 15 touchdowns. The next year, he had 2,390 total yards making NFL’s second-highest in history. The year, he became nominated for the Ground Player of the Year Awards. In September 2005, the contract was extended to 2008.

On the 10th of February 2007, he had the last game in the 2007 Pro Bowl and took retirement from Football. In 2011, he tried to make his comeback in NFL. However, no NFL team was interested to sign him.

After his football career, he has resumed his career as a television broadcaster with NBC’s program, The Today Show.

Later, he became a correspondent of the show. Also, he is an analyst for the show, Football Night in America. Moving forward, he got associated with the show and events like Morning Joe, the 2008 Summer Olympics, and the 2010 Winter Olympics. Currently, he is a co-host of the show, Tiki and Tierney Show since January 2013.

Apart from that, as a businessman, he co-founded the Sports Media and Events Company, Thuzio. Also, he is associated with O Beverages LLC as an investor. In 2018, he co-founded Grove Group Management.

Also, he has authored many books with his twin brother. Some of them include Wild Card, Goal Line, Go Long!, and Kickoff!

Apart from that, he also makes through the royalties of his books too. As a Running back of the New York Football Giants, his earnings were in the range of $472k.

Back in 2002, he has been in the headlines of the news. He publicly criticized Michael Strahan when Michael negotiated his new contract. At the time, he called even remarked he was greedy too.

Tiki Barber has black eyes with clean-shaven hair. He stands at a height of 5 feet 10 inches and weighs around 93 kg.

You may also read the bio of Ben Foster, Rasheda Ali, and Shaun Phillips.