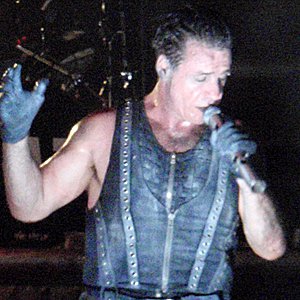 Loneliness sometimes gives me a quantity of creativeness - you're drinking another glass of wine and you're feeling even worse. Art doesn't work without pain

You can't easily break out of this cycle of love. It's always here and there up and down.. pain and joy, this wonderful feeling of being in love, which will come to an end later, is so dominating through your entire life. And you cannot escape it

Love is like a flower, even the most beautiful kind dies.

Relationship Facts of Till Lindemann

Reflecting on a personal life of Till Lindemann, he is possibly single. Although his career took on a successful path her love life couldn’t do so. Previously, he was married to Anja Köseling in 1985 but his relationship couldn’t last for long.

They got divorced in the year 1997. He has been blessed with one daughter Marie Louise born in 1993 from his first marriage. Then he was in a relationship with Marino Drujko in 2000. He was also in a romantic relationship with Sophia Thomalla from 2011 to 2015.

He became a grandfather when his first daughter Nele gave birth to a son referred as “Little Fritz”. He had single raised her first daughter Nele for seven years. There isn’t information about him being in other romantic relationship that we know of. Being a celebrity, his fans are always curious to know more about him.

Who is Till Lindemann?

Multi-talented Till Lindemann is a German singer, songwriter, musician, actor, poet, and pyrotechnician who is active in the singing field since 1981. He is best known as the lead vocalist and frontman of the German Metal band Rammstein. The band is famous for songs like Engel and Links 2-3-4.

The son of Werner Lindemann and Brigitte Hildegard Lindemann, Till Lindemann, was born in Leipzig and raised in the village of Wendisch-Rambow. He was born on 4 January 1963 to poet father and journalist mother. He has a younger sister named Saskia.

He is of German ethnicity and has German nationality. When he was young his parents got divorced. Lindemann was a strong athlete during childhood and attended a sports school at the Empor Rostock Sports Club.

Later, he attended a boarding school. He competed in the European Junior Swimming Championships and he was also invited to the Olympics but his swimming ended due to his injury.

Till Lindemann: career, salary, and net worth($4 m)

Talking about career journey of Till Lindemann, he is active in singing since 1981 and he is still active in it. Before he rose to fame, he has done various odd jobs. Then he started his musical journey as a drummer. He showed up with different groups before he started composing his own music.

In 1994, he established the band Rammstein. Rammstein went ahead to wind up noticeably a standout amongst the most mainstream overwhelming metal/goth groups in the world. The band is known as much for their over-the-beat exhibitions including fire and simulated sex acts, with respect to their music.

He really chose to earn his pyrotechnic permit due to the use of flame in their shows which brought such a large number of wounds and harms before. He has additionally filled in as visitor entertainer for various different specialists and has distributed two books of verse.

Till Lindemann: Rumors and Controversy/Scandal

He is rumored to have hooked up with Alycen Rowse.

He has a height of 6 feet 1 inches with a body weight 100 kg. Her hair color is dark brown and her eye color is Hazel.