Tim Daly is the President of TheCreativeC and an actor on #MadamSecretary. Tim is having an affair with his co-star. 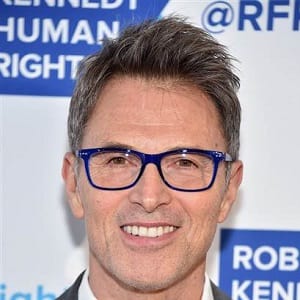 I've found that the majority of my work is just a series of grunting, groaning and straining noises. Because, you know, Superman is forever getting clobbered with force fields, nuclear weapons, trains -- whatever large, blunt, heavy objects are at hand to clobber him. I have to dig deep for those special noises.

I've always felt if my nose were more crooked, critics would focus more on my acting.

Thank God for acupuncture. It's been around for 2000 years. It's not going anyplace and people use it all of the time for a variety of cures and to avoid illnesses.

Eastern medicine is not about curing your sickness. It's about keeping you well.

We sort of have given up on the idea of taking any sort of personal responsibility for what we see. I don't understand it at all. There are many things that I won't let my kids watch.

What is the relationship of Tim Daly?

Previously he was married to actress Amy Van Nostrand. They married on 18 September 1982. The pair has two children together, Sam Daly and Emelyn Daly. They later separated in 2010.

Who is Tim Daly?

Tim Daly is an American actor and producer. People mostly know him for his role as Joe Hackett on the NBC sitcom ‘Wings.’

Additionally, he also provided the voice role of Clark Kent/Superman in ‘Superman: The Animated Series.’

Daly was born James Timothy Daly in Manhattan, New York City, New York on March 1, 1956. Currently, he is 66 years old. He was born to parents James Daly and Mary Hope. Both his parents were actors.

Additionally, he has three siblings Tyne Daly, Pegeen Michael Daly, and Glynn Daly. He developed a keen interest in acting like a child.

He is of American nationality. Furthermore, he belongs to the mixed ethnic background of Irish, English, Scottish, and German.

Talking about his education, Daly attended The Putney School. Additionally, he also attended Vermont’s Bennington College. He has a Bachelor of Arts degree.

Daly initially began his career in acting when he was seven years old. He appeared in the stage play ‘Jenny Kissed Me’ by Jean Kerr. In 1966, he appeared in the TV movie ‘An Enemy of the People’.

Additionally, Tim played the role of Dann in the TV series ‘Hill Street Blues’. He appeared as Dr. Edward Gillian in another TV series ‘Ryan’s Four’ in 1983.

Since then, he has appeared in several other movies and television series. At present, he has more than 75 credits as an actor.

Some other movie and television series that Daly has appeared in is ‘Madam Secretary’, ‘Tell Me a Story’, ‘Submerged’, ‘The Daly Show’, ‘A Rising Tide’, ‘Hot in Cleveland’, ‘The Mindy Project’, ‘Low Down’, ‘Hawaii Five-0’, ‘Waking’, ‘Private Practice’, ‘The Nine’, ‘The Skeptic’, ‘The Sopranos’, ‘Law & Order: Special Victims Unit’, ‘Commander in Chief’, ‘The Good Student’, ‘Return to Sender’, ‘Judging Amy’, ‘The Fugitive’, ‘Superman’, ‘Seven Girlfriends’, and ‘Invasion America’ among others.

Furthermore, she also has 6 credits as a producer and a credit as a director. He is also an activist in various liberal political and social causes.

Daly has not revealed his current salary. However, he has an estimated net worth of around $10 million at present.

Daly made the news in 2017 after he was involved in the Sundance Skiing accident. He broke both of his legs in the accident. At present, there are no rumors concerning Daly and his career.

Additionally, his hair color is dark brown/blonde and his eye color is brown.

Also know more about the early life, career, net worth, relationships, and controversies of other actors including Dale Midkiff, Jason Bateman, Chris Hemsworth