Tim Duncan is a former player of the San Antonio Spurs of the National Basketball Association.

Tim Duncan was once married to Amy Duncan. The couple got married in 2001. In 2013 the couple divorced. The divorce was initiated by Amy.

She stated the marriage was “insupportable because of discord and conflict”. Tim has two daughters Sydney and Quill and a son Draven. He now lives a single retired life and is happy. 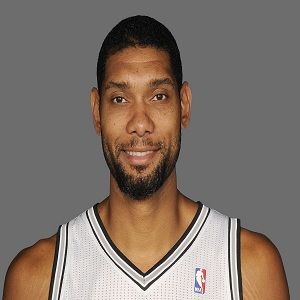 Good, better, best. Never let it rest. Until your good is better and your better is best

I enjoy jokes, smiling, and making people smile. I may be a little different, but that's OK, who wants to be normal anyway?

I'm surrounded by nothing but great people. I've been blessed with that, so really, I've got no choice but to be an all-around good person

Who is Tim Duncan?

Timothy Theodore Duncan or simply Timothy Duncan is a retired professional basketball player. He is from Saint Croix, U.S. Virgin Islands. His 19 years of player career began and ended with the San Antonio Spurs (1997-2016). One of the greatest power forward of all time Tim, now lives a happy retired life in San Antonio.

Timothy Theodore Duncan was born on April 25, 1976, in Saint Croix, Virgin Islands. Hs is the son of William Duncan, a Mason, and his mom alone and a midwife.

The youngest child of four, he has two sisters Cheryl and Tricia, and a brother Scott. As a teenager, Tim wished of becoming a professional swimmer. Hurricane Hugo in 1989 destroyed the only Olympic-sized swimming pool of the island that he lived in. His dreams were shattered. To relieve his frustrations he shifted his focus from swimming to basketball.

When Dave saw Tim play basketball for St. Dunstan’s he just knew there was a future for that boy. It was Dave who persuaded Tim to attend Wake Forest University.

Though Tim got scholarship offers from the University of Hartford, University of Delaware, and Providence College. He declined all to join the Wake Forest Demon Deacons. Tim graduated from Wake Forest and holds a degree in psychology.

The professional basketball career Tim began with the Saint Antonio Spurs in 1997. He never had to look back again. Voted the NBA Defensive Player of the Year, NBA All-Star Game, and many others Tim led Spurs to a different level.

He is the 19th player in NBA history to reach the milestone. After 19 seasons with the San Antonio Spurs on July 11, 2016, Tim retired from Spurs.

The awards and achievements of Tim Duncan comprise a long list. Five times NBA Champion, three times NBA Finals MVP, two times NBA MVP, fifteen times NBA All-Star, and numerous others this NBA star has it all. In 2017, Duncan got inducted into the College Basketball Hall Of Fame.

Tim’s salary details are unknown. His net worth is estimated to be $155 million as of 2022.

Tim is often criticized for his silent nature. We can say for sure he speaks loud on the basketball court.

Tim has a gigantic personality. He is six foot and eleven inches tall and weighs 113 kilos. The color of his hair is black. His eye color is black. Other details on his dress size, shoe size is unknown. Sure enough, a man of such volume would require an enormous dress and shoes.