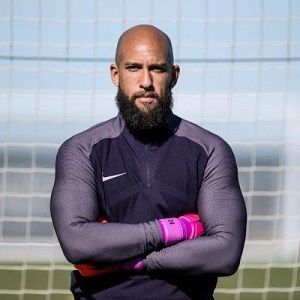 Winning is fun, but those moments that you can touch someone's life in a very positive way are better: Stay humble, stay grounded, remember what got you to that level and that’s hard work: It will take a nation of millions to hold me back.

Tim Howard is married to Laura Cianciola back in 2003. They also have two children Jacob and Alivia. After nine years of marriage, they separated in 2012.

He began dating another girl Sara McLean in 2014, as he was playing for Everton. It was also rumored that Tim Howard begged his ex-girlfriend to have an abortion when she became pregnant.

At present, this player is dating a model, Nora Segura.

Who is Tim Howard?

Tim Howard is an American professional soccer player. He is at present associated with a club, Memphis 901 as a goalkeeper.

His father Matthew Howard is an All-American and his mother Esther (née Fekete) is Hungarian.

His father worked as a truck driver and his mother worked for a container packing distributor. Talking about his childhood, it wasn’t easy at all. At the early age of three, his parents separated and he started to live with his mother. When he was in the sixth grade, he was suffered from Tourette syndrome.

Talking about his academics, he has joined North Brunswick Township High School but didn’t complete it.

Tim Howard started his football career with North Jersey Imperials in the year 1997. Then he was shifted to MetroStars.

He made his debut in a victory over Colorado on August 18, 1998. He has always been the first-choice goalkeeper for MetroStars and also won the 2001 MLS Goalkeeper of the Year award. Howard played five seasons with MetroStars before leaving for English giant Manchester United.

Everton signed him as a permanent player after signing a season-long loan in the 2006–07 season. As a goalkeeper, he also scored a goal in a 2–1 defeat to Bolton Wanderers in the 2011–12 season. On March 20, 2016, Howard joined Colorado Rapids on a three-and-a-half-year contract. Then in 2020, he joined another team Memphis 901.

Concerning his international career, he played the with United States under-20 national team. Furthermore, he has already represented his country in three World Cup in 2006, 2010, and 2014. Furthermore, has been shared the pitch with Clint Dempsey and Michael Bradley.

Talking about his awards and honors, he has managed to earn enormous awards throughout his career. This player was awarded for MLS Goalkeeper of the Year in 2001.

This sportsperson’s estimated net worth is $10 million. He is earning a handsome amount of salary of $3M per year.

Tim faced controversy for foul language directed toward a fan during and for an altercation with a fan. Moreover, he made a fiery conversation with the SKC forward Dom Dwyer after the final.

Apart from this, he has managed to make quite a long distance with the topic of rumors and controversy.

Tim Howard has a height of 6 ft 3 inches and weighs 95 kg. His attractive feature is his long black beard. He is bald and his eye color is dark brown.

Tim Howard is equally active in social media. On his Instagram and Twitter, he has over 663k and 705.2k followers respectively.

Moreover, he is followed by over 1.1 M followers on Facebook.