Failure of his marriages

Tim Lovejoy is divorced, thus he is currently single.

In 2002, Tim Lovejoy married Jade Lovejoy for the first time. They have twin daughters named Grace and Rose as a result of their relationship. They were also introduced into this world the same year their parents married. Unfortunately, the Couple’s marriage did not last long, as they divorced in 2006.

Following the breakdown of his first marriage with his wife Jade, Tim Lovejoy began a relationship with English netball player Tamsin Greenway. After years of courting, they exchanged vows in 2012. After a year, on May 22, 2013, they had a lovely girl named Jamie Jeane Lovejoy. He also tweeted about the announcement, revealing the baby’s name and the mother’s and baby’s good health. Their relationship was going well until May 2016, when Lovejoy broke the sad news that they had split up.

Despite the fact that they have dissolved their relationship, they remain, good friends, since they have many happy moments together and he has a wonderful connection with his daughter. 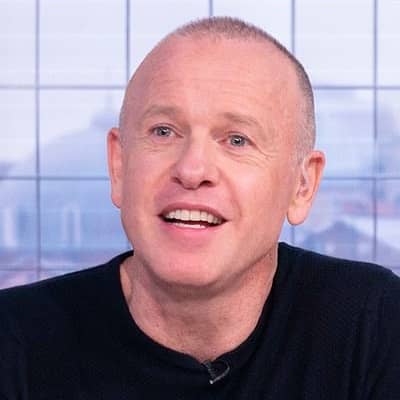 Who is Tim Lovejoy?

Tim Lovejoy is a well-known television presenter, Author, and co-wrote two cooking books with Chef Simon Rimmer and his own biography on football from British.

He is best known for hosting a Saturday morning football program named Soccer AM with Helen. He hosts Sunday Brunch on Channel 4 and BT Sports Panel on  Saturday mornings on BT Sport Channel.

Tim Lovejoy’s recent work was 2021 called I Literally Just Told You, Trip Hazard, and Sunday Brunch which was aired in 2012. Talking about his upcoming projects there is not much information regarding it.

Timothy Paul Lovejoy was born in Northwood, London, England on March 28, 1968. He has British nationality and has not shared his ethnicity with the media.

In terms of family members, Tim Lovejoy has not disclosed the names of his mother and father, as well as their occupations. There is also no information on whether or not he has siblings. Also, there is no information available about her childhood.

Tim Lovejoy has already completed his university and high school education. He has, although he has never disclosed what major he majored in or from which universities he received his degree. He has always kept his educational history hidden from the media.

Tim Lovejoy began his television career as a substitute VJ for MTV. After that, he joined Planet 24 as a researcher for The Big Breakfast before being the show’s producer. In the 1990s, he also delivered Richard Marson‘s novel, Blue Peter.

A career in Soccer AM

In 1996, Tim Lovejoy and Helen Chamberlain co-hosted and produced the football show Soccer AM on Sky Television for 11 years. Following the success of Soccer AM, he went on to become a radio DJ, first at Xfm and then at Virgin Radio, where he temporarily had a Sunday afternoon program.

On Sky 1, he also presented Tim Lovejoy and the Allstars, a show similar to TFI Friday.  He was chosen co-host of the automobile show Fifth Gear in 2006. Tim announced his departure from Soccer AM after eleven years on June 5, 2007.

A career in Post-Soccer AM

Tim Lovejoy joined BBC Radio 5 Live as the host of its football phone-in show 6-0-6 on Wednesday nights, but he was dismissed in 2009. He also hosted the UK edition of David Beckham‘s Soccer USA, a show on Five’s Major League Soccer magazine. Tim established Channel Bee, an internet TV channel, in 2008. However, the website was taken down on November 20, 2009.

In February 2010, Tim Lovejoy guest illustrated an episode of Blue Peter 12 years after actively looking for the show. During the Show, the Original clip of his audition was shown. Lovejoy had a brief appearance as a news reporter in the comedy film Being Sold in 2010 and also appeared in the Celebrity MasterChef 2011 season.

From 2006 until 2012, Tim Lovejoy co-hosted the BBC2 Sunday morning TV show Something for the Weekend with chef Simon Rimmer and a variety of female co-hosts, including Louise Redknapp.

Tim and Rimmer began hosting a new show for Channel 4, Sunday Brunch, on March 25, 2012. They debuted a short-lived spin-off series called Daily Brunch in 2014 and lasted for eight weeks.

In 2017, Lovejoy started Dear Lovejoy, which began as an agony uncle podcast but evolved into a series of interviews.

When it comes to Tim Lovejoy’s accomplishments, he has accomplished a great deal and has become one of the most successful persons in the world. Despite the fact that he has become a presenter for several shows, he has not discarded the information about the awards he has gotten and been nominated for. Perhaps in the future, he will share his awards with the many individuals who love and support him.

According to reports, his net worth will be $18 million in 2022, and Tim Lovejoy will earn $400,000 every year. His every fortune stems from his employment as a presenter and author. His other important possessions, such as property and a house, are still unknown.

Tim Lovejoy has been involved in any bad rumors or scandals that might have an impact on his personal and professional life.

Tim Lovejoy is a handsome man who is 5 feet 10 inches tall. Despite the fact that we know his height, his body weight has yet to be determined, according to the source.

Similarly, his physical measurements such as hips, waist, and bicep sizes are unknown. On the outside, he has black hair, grey eyes, and a beautiful grin.

Tim Lovejoy spends much of his time on social media, sharing happy moments with his followers. He is active on Instagram, where he has 113k followers and 1483 posts.

On Instagram, he has posted several photographs of himself having a good time. He uploaded a snapshot of a dish with the words “In commemoration of the first 10 years Sunday Brunch” around a week ago.

Similarly, Tim Lovejoy has a Twitter account with 621.4k followers and about 52.9k tweets. He also has a YouTube channel called Tim Lovejoy, which has 3.81k followers.

Many people enjoy seeing the videos that he posts. In terms of other social media, he is not active on Facebook or Tiktok.