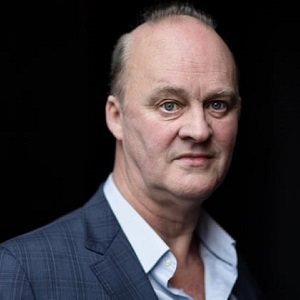 But there is no information about the exact date of their marriage. As of now, he is in a relationship.

Who is Tim McInnerny?

Tim McInnerny is an English actor who is known for his many roles like  Lord Percy Percy and Captain Darling in the Blackadder series. Similarly, he has also starred in various films like Wetherby, 101 Dalmatians. In the year 2001, he played Geoffrey Pyke in the radio play Habbakuk of Ice by Steve Walker.

He was born on 18th September 1956 in Cheadle Hulme, Cheshire, England. He is the son of William Ronald McInnerny and Mary Joan. Similarly, he was brought up in Cheadle Hulme, and Stroud, Gloucestershire with his sister Lizzy McInnerny.

Likewise, he belongs to British nationality and his ethnicity is unknown.

Talking about his education, he attended Marling School which is a grammar school in Stroud. He studied English at Wadham College, Oxford.

One of his first roles was the bumbling aristocrat Lord Percy Percy in The Black Adder during the early 1980s. Similarly, he reprised his role in the second series Blackadder II but declined to do so for the third series for fear of being typecast, though he did make a guest appearance in one episode.

Likewise, he has starred in various films like Wetherby, 101 Dalmatians written by Blackadder creator Richard Curtis. Later, he played Dr. Frank-N-Furter in 1990 of The Rocky Horror Show.

Similarly, in the year 2017, he played Allan Quatermain in a two-part BBC Radio 4 adaptation of King Solomon’s Mines. In the year 1989, he co-starred with Kate Bush in the music video for her song “This Woman’s Work”. Further, he also appeared in the Westlife video for “Uptown Girl”

The estimated net worth of Tim McInnerny is around $1.9 million. He might earn a huge amount of money from his career. But he has not disclosed his salary and incomes.

Tim McInnerny has a height of 6 feet 1 inch and his weight is 80 kg. Similarly, his hair color is salt and pepper and he has blue color eyes.