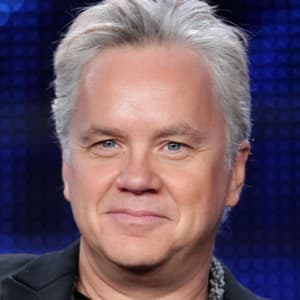 “When you make the judgement as a network that there are only three candidates, you are censoring points of view.”

What is the relationship of Tim Robbins?

He was secretly married to Gratiela Brancusi. So their marriage date, wedding details are unknown. In January 2021, the reports are that he and Gratiela have split. Robbins filed for divorce from her in Los Angeles.

Previously, he was in a relationship with actress Susan Sarandon in 1998. They first met on the set of Bull Durham.

They welcomed their first child, John ‘Jack’ Henry on May 15, 1989, and welcomed their second child, Miles Guthrie on May 4, 1992. But the couple divorced in late December 2009. The reason for their separation is still unknown.

Susan has a daughter Amurri Martino from her past relationship with Franco Amurri. Though Amurri is his stepdaughter, he treats her like his own child. He once said in an interview about Amurri,

“I have to say I’m also proud of my daughter too, who is a mother of two. She’s an amazing parent and a super talented writer. “

Who is Tim Robbins?

Tim Robbins is an American actor, director, producer, screenwriter, and musician. He is known best for his portrayal of Andy Dufresne in the prison drama film ‘The Shawshank Redemption. He had been awarded Oscar and SAG awards for his role in ‘Mystic River’ in 2003.

He was born on October 16, 1958, in West Covina, California and he was raised in New York City. He was given the birth name Timothy Francis Robbins. His mother’s name is Mary Cecelia and his father’s name is Gilbert Lee Robbins.

His father was a singer, actor, and former manager of ‘The Gaslight Café’ and his mother was an actress. His family belongs to Catholic. He has two sisters and is named Adele and Gabrielle and he has a brother, David.

He shifted to Greenwich village at a young age with his family and his father started a career as a member of the folk music group ‘The Highwaymen’. Tim holds American citizenship and he has a mixed ethnicity of English, French-Canadian, Norwegian, Scots-Irish/Northern Irish, Scottish, German, and distant Dutch, ancestry.

He joined the drama club at Stuyvesant High School and later he spent two years at SUNY Plattsburgh. Then, he returned to California to study at the UCLA Film School and graduated from there with a Bachelor of Arts degree in Drama in 1981.

He started his career at Theatre for the New City and he spent his teenage years in their Annual Summer ‘Street Theatre’ and played the lead role in a musical adaptation, ‘The Little Prince’.

Tim made his appearance as domestic terrorist Andrew Reinhardt in three episodes of the television program ‘St. Elsewhere’ in 1982. He made his breakthrough performance as pitcher Ebby Calvin ‘Nuke’ LaLoosh in the 1988 film ‘Bull Durham’. He portrayed a Vietnam War veteran having difficulty separating reality from delusion. He increased his reputation working with the late director, Robert Altman. Tim also wrote, directed, and starred in the political mock-documentary Bob Roberts in 1992.

He completely stepped behind the camera for the critically acclaimed death penalty drama ‘Dead Man Walking’ in 1995 and he received an Academy Award nomination for his directorial work.

Tim made his appearance in the independent drama ‘The Secret Life of Words’ in 2005, the family fantasy ‘Zathura: A Space Adventure’ in 2005, and ‘War of the Worlds, in 2005. He gave the voice to the animated political satire about the Iraqi War, ‘Embedded’ in 2005. He contributed as the artistic director of The Actor’s Gang theatre company in L.A.

As of 2022, it is estimated that he has a net worth of around $70 million and his main source of income is his professional career. His salary is under review.

He served as a presenter at the 1993 Academy Awards, he and his wife, Sarandon took some of their time on camera to highlight the plight of HIV-positive refugees from Haiti who were being detained by the U.S. government. They became successful in securing the release of those refugees, but they received harsh criticism from the media and the Academy of Motion Picture Arts and Sciences for their actions. They were also banned from the next year’s ceremonies.

He has a height of 6 ft. 5 inches and he weighs 97 kg. He has got brown hair and black eyes. Other information regarding his dress size, shoe size, etc. is not available.

Singer Dua Lipa celebrates 25th birthday with interesting wishes on Instagram by her loved ones! Relationship timeline of Dua Lipa and Anwar Hadid