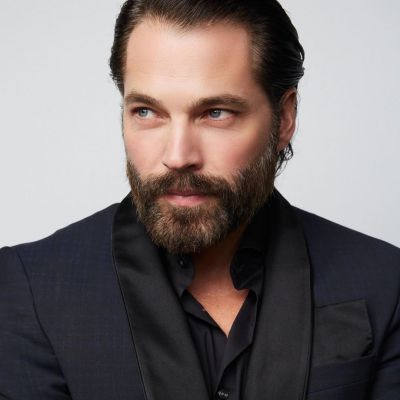 What is the relationship of Tim Rozon?

Talking about his relationship details, Tim Rozon is living a married life with Lindsay Govan aka Linzey Rozon. Linzey is a well-recognized Canadian equestrian. The couple tied the knot on 6 September 2015.

Moreover, the love birds welcomed their son in 2020. On 21 June 2020, Govan posted her son’s picture for the first time on Instagram.

Who is Tim Rozon?

Rozon is widely famed for his roles as Tommy Quincy on the CTV teen drama Instant Star, Mutt Schitt in the CBC comedy Schitt’s Creek, and Doc Holiday on the supernatural/western drama series, Wynonna Earp.

How old is Tim Rozon?

Tim Rozon was born on 4 June 1976. At present, his age is 46 years old. Likewise, his birthplace is Montreal, Quebec, Canada.

Tim has been secretive about his family details. Moreover, he has not mentioned his sibling’s information in the public yet.

Talking about his nationality, Rozon holds a Canadian identity whereas his ethnicity is Caucasian.

Regarding education, the star has not stated his academic background to the public. He might have completed his graduation from the university of the town.

Rozon then featured in his career-breaking role in 2004 when he was cast as Tom “Tommy Q” Quincy on the musical teen drama, Instant Star.

Additionally, Rozon performed in 54 episodes over four seasons. The star featured in the miniseries Would Be King, and the film, Production Office.

Next year, Tim performed a recurring role on CBC Television’s Wild Roses, guest-starred on The Listener, and co-featured with Lance Henriksen and Stephen Amell in the Sci-horror film, Screamers: The Hunting.

Tim in advance lent his voice to the Canadian 3-D animated movie, The Legend of Sarila(2013), which also featured the voice of his future Schitt’s Creek, co-star Dustin Milligan.

Some of his remarkable roles in television series are: –

A famed Canadian actor, Rozon has earned a handsome amount of money from his profession. He has been active in his profession from the year 2000 till the present.

It is reported that Tim Rozon has an estimated net worth of $2 million as of 2022.

Before the star’s marriage, Tim was rumored to be gay. However, the star did not make any statement against such rumors.

He was also rumored to have dated his co-star Alex Johnson from Instant Star. But his marriage clarified all the scandals and rumors.

Earlier, Rozon was reportedly doubted to have dated Likaen Parker who was  Ryan Seacrest‘s ex.

What are the body stats of Tim Rozon?

He stands at a height of 5 feet 11inches. Also, he has a balanced body weight of 74 kg.

Furthermore, Rozon has blue eyes whereas his hair is black.

Nevertheless, the popular star has never mentioned other physical details in the public yet.

He is also active on Twitter with around 86k followers.

However, Rozon is not available on Facebook at the moment.

Wayne Brady and Rozonda ‘Chilli’ Thomas are in a relationship! Their past affairs, marriage. Chilli’s ex-boyfriend Usher

Matthew Lawrence is off the market! He introduces new romance after divorce from Cheryl Burke