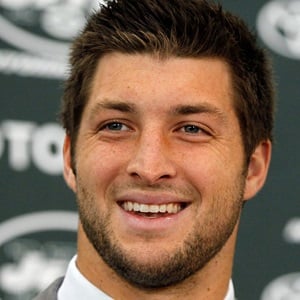 [on throwing a game-winning 80-yard pass to Demaryius Thomas] When I saw him scoring, first of all, I just thought , Thank you, Lord.

After a year of engagement, Tim Tebow and Demi-Leigh Nel-Peters married!

Tim Tebow was in a relationship with the American model Olivia Culpo in November 2015.

Who is Tim Tebow?

Additionally, he previously played college football for the University of Florida.

Tebow was born Timothy Richard Tebow in Manila, the Philippines on August 14, 1987.

He was born to his father Robert Ramsey Tebow II and his mother Pamela Elaine Tebow. He is the youngest of five children. His siblings are Robby Tebow, Peter Tebow, Katie Tebow Shepherd, and Christy Tebow Allen.

Tim is dyslexic. He is of American and Philippine nationality. Furthermore, he belongs to a mixed ethnic background of English, German, Irish, Scottish, and Belgian.

Talking about his education, Tebow attended the University of Florida after receiving an athletic scholarship.

Tebow spent his freshman year as a backup and became a key contributor for a team that went on to win the BCS Championship. Additionally, next year, he became the starting quarterback.

In addition, he set numerous records in the 2007 season, and in the 2008 season, he led his team to victory in the BCS National Championship game. Coming to Tim’s NFL career, he was drafted by the Denver Broncos in the first round of the 2010 draft.

Tebow replaced Orton as the Broncos’ starting quarterback in the 2011 season. In addition, the Broncos beat the Pittsburgh Steelers in the wild-card game of the playoffs.

In the 2012 season, he was traded to the New York Jets. Furthermore, the New England Patriots signed him to a two-year contract in June 2013.

He eventually became a college football analyst for ESPN in late 2013. On April 20, 2015, he signed a one-year contract with the Philadelphia Eagles.

Talking about his baseball career, Tebow signed a minor league contract with the New York Mets on September 8, 2016. The Mets organization announced that Tim had broken the hamate bone on July 23.

Additionally, he also won the Manning Award in 2008 and Heisman Trophy in 2007.

This player made the news after he was dragged into the league’s kneeling controversy.

He later explained that he never knelt during the national anthem before any sporting event and it was just him performing prayer.

At present, there are no rumors concerning Tebow and his career.