Skip to content
Married Biography
Married Biography / Entertainment / Time To Celebrate For The Ace Family!! Austin McBroom And Catherine Paiz Together Expecting Their 2nd Baby After Their Daughter Elle 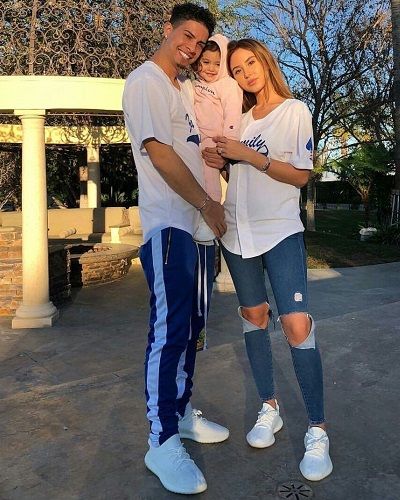 Ace which means Austin McBroom, his fiance Catherine Paiz, and their adorable daughter, Elle Lively McBroom. And now very soon there will be a new member of the family as Catherine is pregnant with her second baby.

They make vlogs and many other challenges on their YouTube channel which has now more than 32.7 million subscribers.

Recently, Catherine took a pregnancy test on one of their videos and it showed up positive. As everything was recorded you can clearly see the happiness in her eyes where she couldn’t stop her tears.

Further, in the video, she with Elle surprised Austin in the most adorable way. They are going to have a baby for the second time!

Also read: The bisexual YouTuber Jeffree Star is probably collaborating with Cardi B for his next album!

As you can see in the video, all the emotions are raw as she took the whole test on the camera, where she also mentioned that they had been trying for the baby for a while.

Moreover, at the start of the video, she also revealed that it may turn negative and couldn’t post the video as the previous time.

After the announcement of the pregnancy, many of their fans were wondering if the arrival of the new member may change the name of the channel.

But replying to all the fan’s concerns about the name, the couple made another video revealing that the name is not going to change.

I’m still speechless, overwhelmed, full of joy, excited. I honestly don’t know what to say. I have many blessings in my life and another one is now added. I’m beyond blessed and thankful ???

The couple has been updating about the pregnancy and their upcoming newborn. In their new video, they mentioned that just like their fans whom they call the Ace family, they are also super excited to know about the baby’s gender. As they are soon going to have a surprise gender reveal party which is held by their close friends.

Not only their fans but the couple is unknown about the gender of the baby and will know the gender reveal day alongside their close family and friends. Their eldest daughter Elle who is soon turning 4 years old was also excited to welcome her baby brother or sister.

You see the both of us…but at the end of the day it’s all about you ?

In their video, you can notice that Elle steals attention with all the adorable and cute gestures. It seems like she is made for the camera. The four-year-old looks super adorable and comfortable being in front of the camera with her cute flaws.

Austin and Catherine engaged as he proposed to her with the diamond ring on her birthday with lots of sweet gestures. He took Catherine who he calls queen on a surprise trip where they went skydiving.

After landing, he first gave an adorable ring to his princess and then proposed to the love of his life. In the video, you will notice that Catherine tears up in happiness. The couple will be soon tying the knot which has been postponed due to the pregnancy.

The ACE family’s new family member, a baby girl Alaïa Marie McBroom was born on 17th October 2018. Parents Catherine and Austin shared the first picture of their daughter, Alaia on October 30, 2018, via their Instagram handle.

Also read: Lifestyle of some YouTubers who are passionate about Unboxing and has set a benchmark on YouTube

Apart from working in the movie, she is also a model at Victoria’s Secret, a TV host, and an Instagram hotshot with over 1.3 million. See more bio…