Posted on September 7, 2022 | In Career , Entertainment , Lifestyle
Share this 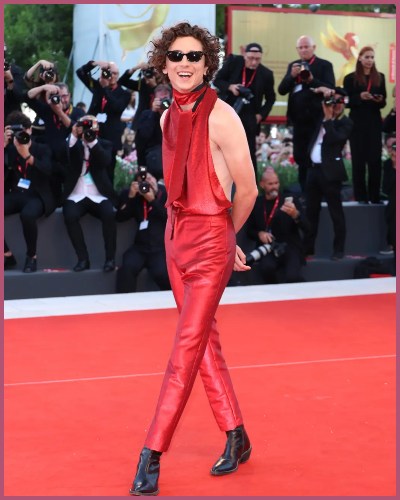 Timothee Chalamet surely knows how to turn heads with his unique fashion choices.

The 26-year-old actor was the talk of the town when he took the red carpet by storm at Friday’s Bones and All premiere at the 2022 Venice Film Festival.

The Call Me By Your Name actor wore a custom Haider Ackermann outfit which consisted of tight crimson trousers and a matching backless halter top that grabbed everybody’s attention.

Social media went into a frenzy mode after photos of the actor in the red outfit started circulating.

“Please take a moment to pause and appreciate what Timothee Chalamet does for the people. Damn. He’s been missed on a carpet.”

Another fan appreciated the actor’s designer duds by saying:

“timothée woke up and decided to end us all.”

On a funny note, Chalamet’s backless outfit received a few comparisons to Mr. Tumnus, James McAvoy’s shirtless, scarf-wearing faun character from the 2005 film The Chronicles of Narnia: The Lion, the Witch, and the Wardrobe.

Also, Read Timothée Hal Chalamet- an American actor from Call Me by Your Name and Lady Bird has a immense filmy background!

Apart from his impeccable acting, the Dune actor is Hollywood’s one of the few gender-fluid dressing actors. Harry Styles and Billy Porter are some on the list.

Chalamet’s iconic look for the Italian film fest is somewhat based on Ackermann’s sprig 2018 collection. More importantly, the collection was modeled entirely by women.

Talking about his bold fashion choices, one fan commented:

“I like that he breaks certain stereotypes and creates his own style,”

The actor also posed with his Bones and All co-star Taylor Russell who wore a green strapless dress by Balenciaga Couture.

This is not the first time Chalamet has wowed us with his fashion choice.

In March, the actor wore a cropped, sparkly Louis Vuitton blazer with lace trim. He did not even wear a shirt and went bare for his Oscars look.

And as ever, the actor is famous for his signature curls.

Also, Read Florence Pugh Hits Back at Vulgar Men For Trolling Her Body!