Timothy Olyphant is an actor, producer who appeared in the horror movie, Scream 2. Timothy is married and the father of three.

Timothy Olyphant is married. He has been married to his wife Alexis Knief since 1991.

The couple has been living together since then, They have welcomed three children: Grace Katherine in 1999, Henry in 2001 and Vivian in 2003. The family is currently living together and there is no sign of divorce between the couple. 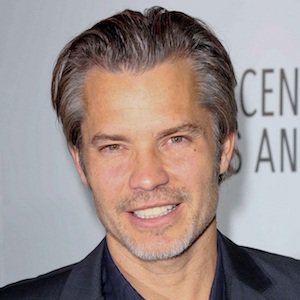 [on turning down the role of Dom Toretto in The Fast and the Furious (2001)] I just thought, well, this will just be stupid, and I thought no one is gonna wanna see this movie eight or nine different times. I mean, by the third or fourth sequel, people are gonna definitely get bored of it. Right?

I used to show up [on set] assuming two things: that everyone is really great at their job and that we were all going to be great friends. I now show up to work assuming that everybody is terrible at what they do and that I'm not going to like anyone of them. And I've had so much more fun because then you're pleasantly surprised by the opposite, as opposed to being terribly disappointed and shit out of luck.

When I was first starting out, I remember my acting teacher (William Esper) telling me, you know, 'Give yourself about 10 years and then you'll get good at it' and I feel like I just sort of crossed that line a few years ago, and I'm enjoying my career more than ever.

Who is Timothy Olyphant?

He was born on May 20, 1968, in Honolulu, Hawaii, USA. His birth name is Timothy David Olyphant and he is currently 52 years old.

His father’s name is J.V. Bevan Olyphant(president at Gallo Winery) and his mother’s name is Katherine Gideon. He has two siblings and his parents got divorced when he was a teenager.

His younger brother, Matt Olyphant was the lead singer for Fetish, and his older brother, Andy Olyphant is an A&R executive for Warner Bros. Records.

He enjoyed drawing, art and swimming throughout his childhood. He initially thought to pursue his career in commercial art and also worked as a swimming coach at Irvine Novaquatics. During the time of applying for a master’s degree, he moved to New York to find more career options.

Timothy holds American citizenship but his ethnicity is a mix of English and Scottish.

He joined Fred C. Beyer High School and later joined the University of California and graduated with a degree in fine arts in 1990.

He initially performed as a stand-up comedian and then joined a two-year acting program at NY William Esper Studio. Then, he got his frusta acting roles in 1985 as Tim Hapgood in the play ‘The Monogamist’.

He portrayed the role of Sheriff Seth Bullock in the HBO series ‘Deadwood’ in 2004 and the series reprised in 2019, in which he worked as an executive producer.

He has an estimated net worth of around $20 million and he has earned that sum of money from his professional career. He was paid around $100k from the TV series ‘Justified’.

There was a rumor that ‘Deadwood’ cancelation was due to panic over him buying a house.

Timothy Olyphant has a height of 6 ft. and weighs 77 kg. He has blue eyes and brown hair. Also, he grits his teeth while speaking and he has an unusual posture.