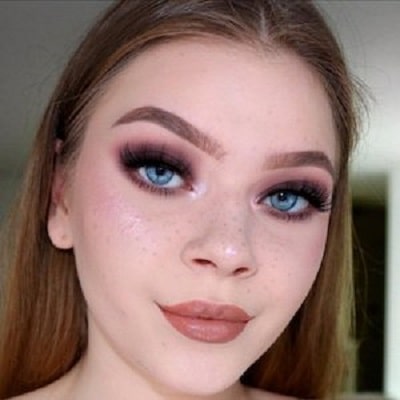 Tina Halada is currently living a single life. Also, she has not been linked with any other persons. She is currently busy with her new projects regarding fashion vlogs, makeup tutorials. Hope, she will find the perfect one very soon.

Tina Halada is an American YouTuber who is recognized for uploading makeup tutorial and tricks, product reviews, beauty tips, and travel vlogs in her channel, Tina Halada.

She was born on June 26, 2001, in New York, USA. Her birth name is Cristina Magdalena Halada and her birth sign is cancer. She has not disclosed the name of her parents however, she has an older sister named Nicole Halada. On 22nd October 2017, Tina revealed being first-generation American whose parents got immigrant from communism in Slovakia after World War 2.

Tina holds American citizenship but her ethnicity is unknown.

She might have attended reputed college and universities but she has not revealed the names of the universities.

At the age of 13, she began her career in makeups and she used to follow the makeup YouTuber Juicystar 07 when she was 11-years-old. In September 2015, she posted her first graphics on both YouTube and Instagram and she created her official Twitter account after two months.

After that, Tina Halada has started uploading her fashion vlog and makeup tutorials on her social media account and she rose with the name of TutorialsByTina. She endorsed different products or services to her followers through videos and has even worked along with well-known makeup artist James Charles.

Her popular video is, “HOW TO DO FAKE NAILS AT HOME FOR BEGINNERS! | Acrylic Nails Under $30!” which has racked more than 4.3 million views as of now.

It seems Tina has not been awarded and nominated for her work till date.

Tina might have accumulated a decent sum of money from her social media career however, she has not disclosed her exact net worth, salary, and income. According to some online sources, she has an estimated net worth of around $500k.

Tina has been successful in keeping her celebrity status and has not been involved in any rumors and controversies in her personal and professional life.

Tina Halada has a height of 5 ft. 6 inches and weighs 56 kg. She has hazel eyes and light brown hair. But her body measurement, shoe size, dress size, etc. are not available.