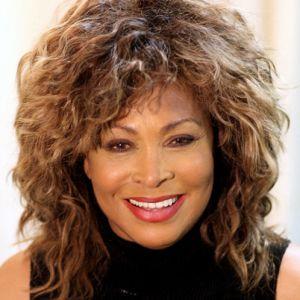 I have a simple, childlike view of life, and I want to keep it. That's why I never got into that Beverly Hills world. So many pretentious people. They just aren't real.

I am strong. I lived through a divorce, separation from my family. I never let it break me down. I'm not an alcoholic. I've never smoked, I've never done drugs. I've floated through the disaster of my past clean. I arrived here undamaged.

I don't hate myself anymore. I used to hate my work, hated that sexy image, hated those pictures of me onstage, hated that big raunchy person. Onstage, I'm acting the whole time I'm there. As soon as I get out of those songs, I'm Tina again.

I will never give in to old age until I become old. And I'm not old yet!

There comes a point where it is just undignified to be a rock 'n' roll star.

What is the relationship of Tina Turner?

Tina Turner was initially involved in a relationship with a boy named Harry who she met at a school basketball game.

Their relationship ended when she discovered that Harry impregnated and married another girl he was dating. Next, she dated saxophonist Raymond Hill.

At 18 she became pregnant. After her mother found out, she went to stay with Raymond who lived with Ike. She gave birth to their son Craig in 1958 and the couple’s relationship became strained.  Later, Turner was with Ike Turner for 20 years but was only married to him for 16 years.

Turner and German music executive Erwin Bach began dating and have remained together ever since.

In July 2013, the pair married in a civil ceremony on the banks of Lake Zürich, in Küsnacht, northern Switzerland.

Who is Tina Turner?

Tina Turner is an American-born singer, songwriter, dancer, actress, and author. She has enjoyed an international solo career with hits like ‘What’s Love Got to Do With It,’ ‘Better Be Good to Me,’ ‘Private Dancer’ and ‘Typical Male’.

Turner was born in Nutbush, Tennessee on November 26, 1939, like Anna Mae Bullock to parents Zelma Priscilla (Currie) and Floyd Richard Bullock. She is of American nationality. Furthermore, she is now also a Swiss citizen. She belongs to an African-American ethnic background.

Throughout her childhood years, Turner sang in the church choir at Nutbush’s Spring Hill Baptist Church. Hence, music was a big part of her early life.

Initially, after graduation, Tina Turner worked as a nurse’s aide at Barnes-Jewish Hospital and dreamed of becoming a nurse. Eventually, she first saw Ike Turner and his band, the Kings of Rhythm, perform.

Soon, she began performing with the group, and she quickly became the highlight of their show. In 1960, she sang the lead on a track titled ‘A Fool in Love’.

Furthermore, in 1966, Tina and Ike’s success reached new heights when they recorded the album River Deep, Mountain High’ with superstar record producer Phil Spector. In 1969, they toured as the opening act for the Rolling Stones.

Additionally, they released the album ‘Workin’ Together’, which featured a renowned slow-to-fast remake of the CCR track “Proud Mary” that reached the top 5 of the U.S. charts and won the two their first Grammy.

Turner began her solo career in 1983 and she recorded a remake of Al Green’s ‘Let’s Stay Together. She released her popular album ‘Private Dancer’ the following year.

In 1985, Turner appeared opposite Mel Gibson in the film ‘Mad Max Beyond Thunderdome’. Furthermore, she also published her autobiography, ‘I, Tina’, which would later be adapted as the 1993 film ‘What’s Love Got to Do with It’.

In addition, she released her second solo album ‘Break Every Rule. In 1991, Ike and Tina Turner were inducted into the Rock and Roll Hall of Fame. All in all, she has more than 100 credits for soundtracks in various movies and television series.

Furthermore, she has more than 50 credits as an actress.

Turner has not revealed her current salary. As of 2022, she has an estimated net worth of around $250 million.

Her husband’s net worth is around $50 million.

Tina’s marriage with Ike Turner was controversial. Furthermore, she revealed that Ike was routinely physically abusive.

In 2013, Tina became part of the news story after Beyonce stirred up controversy with references to Turner’s abuse.

Currently, there are no rumors concerning Turner and her career.

Talking about her body measurement, Tina Turner has a height of 5 feet 4 inches. Additionally, she weighs 58 kg.

Tina is quite active on social media. She has a huge number of followers on social networking sites such as Facebook, Twitter as well as Instagram.