Tiny Texie is an adult entertainer, a performer, a social networker, and a TikTok actress.

Dating a girl but has a kid with other guy!

Firstly, Tiny Texie is a bisexual. She is currently in a relationship with Anastasia Graves. Her partner is a co-reality TV star and makeup artist.

In fact, her short height has been unique in her relationship with taller girls mainly with her public. The couple got the spotlight in the new season of the WE TV series Extreme Love.

Tiny Texie has previously conceived a kid (daughter) with a guy but they have broken up. Presently, she is dating a girl. 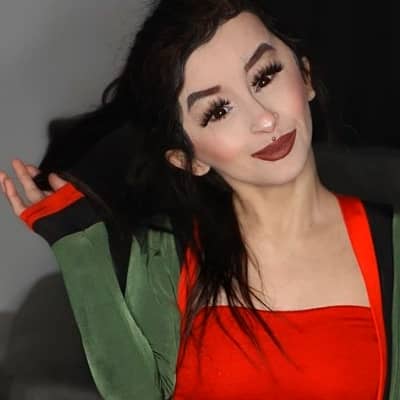 Who is Tiny Texie?

Tiny Texie is an adult entertainer, a performer, a social networker, and a TikTok actress from America. In addition to that, her unique physique is very captivating.

She had Kenny-Caffey Syndrome and hereditary skeletal disorder from birth. As a result, she looks like a child.

Meanwhile, her amazing sense of humor makes us feel that her career as a comedian is bright enough.

0n January 25, 1992, our star was born in Texas. Aquarius is her birth sign. Her birth name is Abgel Seizmore.

Though she is an American, she belongs to mixed ethnicity. The family details about her parents and siblings are not available at the moment.

Although the educational background of Tiny Texie is not disclosed on the internet, she might have completed her education in her hometown.

Comparatively, this girl has a shorter height than most of the adults in the town. But it’s her height that makes her noticeable amongst all. She is 3 feet and 6 inches tall, weighs around 60 pounds.

Noticeably, Texie has an appealing look with her brown eyes, black hair, and tiny features.

Approximately, she has a net worth of around $500,000. Her per annum earnings however are not disclosed. It’s quite evident that she earns from social media, dancing, modeling, the adult industry, ad-sense, and brand promotions.

At first, she got noticed in 2015 when she began to participate in beauty competitions. Afterward, her modeling career took off. She became the face on the front pages of magazines like Entertainer Magazine in Florida, USA, and Inked Magazine.

Regarding, her adult film career there are no fixed dates. Besides her tiny looks, she establishes herself in the adult entertainment industry. Her videos can be seen on many adult sites right after entering her name.

She is active on Instagram with a family of around 460k and about 5 Million followers in TikTok. In addition, she has 78.9k followers on Twitter. She also owns a website named officialtinytexie. She also uses Facebook and Youtubes with 30k subscribers.

Though she manages to keep herself away from rumors, the origin of her daughter is still questioned as her father is not disclosed on media.