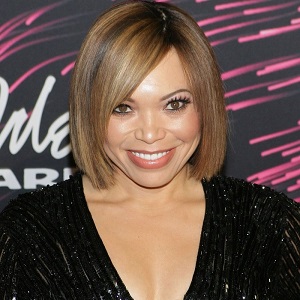 Autistic children are extremely bright if you can connect to them and bring them into our world. Socially it's really hard for them, but it can happen

I became an actress and studied human emotions so that I could give the gift of feelings to my son. This is what my whole journey has been about

I hang out with people who are amazing parents and really value a rich living. I'm not talking about monetarily. I'm talking spiritually and mentally, and we help make sure that each one is on their game for their spouses.

Tisha Campbell is currently single. She was married to Duane Martin who is an actor turned real estate developer by profession. The couple married on 17th August 1996 and were blessed with two babies, Xen Martin on August 2001 and Ezekiel Czar Martin September 8th, 2009.

Her first son Xen Martin has an Autism, complex disorder of brain development. The couple had been in a married relationship for more than 20 years but now they are separated. They divorced each other in 2018.

Who is Tisha Campbell?

Tisha Campbell is an American actress as well as a singer, best known for her starring role in Fox television series, Martin as Regina from 1992 to 1997 and as Janet on the ABC television series My Wife and Kids from 2001 to 2005. She is also mostly known as Damona for her role in ABC comedy show Dr. Ken. Her music video ‘Steel here’ was released in September 2015 and released the single ‘Lazy Bitch’ in 2016.

Born as Tisha Michelle Campbell in Oklahoma City and raised in Newark, New Jersey. His nationality is American and ethnicity is African-American.

She was born to Mona(mother) and Clifton Campbell(father). She has one older brother, three younger brothers and one younger sister.

She joined Newark Arts High School. Since childhood, she had a love for music. She had won a car as a grand prize when she took part in the competition for the first time. Campbell says that she got raped when she was just three years old.

Campbell is a member of the American Film Institute and the Writer’s boot camp. She had already started acting at an early age and won many talent shows. She made her first film debut in 1986 musical Little Shop of Horror when she was in the high school. Her mother is also her manager.

In her acting career, she had been nominated for many awards and she had also won a couple of awards like Image Award and BET Comedy Award for Outstanding Actress in Comedy Series. Besides her acting career, she is also a well-known singer. Her first debut album ‘Tisha’ was a success selling 40,000 copies. Campbell has spread her wings equally in the world of TV as well as in the singing industry equally at ease with both forms of media.

She even sang and appeared in many videos of her own as well as others such as Will Smith, Toni Braxton, etc. Campbell even produced Audience Choice Award winning short film ‘A Luv Tale about two women who fall in love with each other. She is also a member of Diva Simply Singing group which raises funds for minority AIDS.

She has a net worth of $15 million but her salary is not revealed yet. She has achieved huge success from her acting career and is living a lavish life with decent earnings.

According to the rumors, Tisha Campbell loves her co-stars. In television sitcom ‘Martin’ it is said that she was in an affair with Martin Lawrence which made them difficult to work together and some anonymous even told that she is best known for fucking her co-stars, for proof Ask Damon Wayans co-star in ‘My Wife and Kids’.

Some of the sources also claim that Tisha Campbell is preparing to divorce her husband Duane Martin.

Tisha Campell has the height 0f 5 feet 4 inches. Her body weighs 66kg. She has black hair and brown eyes. Furthermore, her bra size is 32B, shoe size is 7 US and dress size is 11 US. Besides these, her body measurements are 32-27-31 inches.