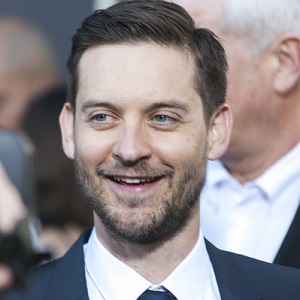 I might have some character traits that some might see as innocence or naive. That's because I discovered peace and happiness in my soul. And with this knowledge, I also see the beauty of human life

If I wanted to go be social I would. I don't have any fear of that. I don't feel like I'm a shy person at all.

What is the relationship of Tobey Maguire?

Maguire met Jennifer Meyer, the jewelry designer, in 2003 during his shoot for the movie. They started dating and got engaged in April 2006.

In November 2006, Meyer gave birth t their baby. They got married on 3rd September 2001 in Hawaii.

They were blessed with another child in May 2009. But, unfortunately, this nine years-long relationship didn’t work out for them and they got separated on October 18, 2016.

Who is Tobey Maguire?

Tobey Maguire is an American actor and producer. He is known for his role as Spider-man in the Spider-man film trilogy.

He often plays the role of heroes that are close to animals. He loves yoga and cooking. Initially, he wanted to be a chef but turned to act because his mother didn’t want him to study home economics.

Tobey Maguire was born in Santa Monica, California, the United States on June 27, 1975. His birth name is Tobias Vincent Maguire.

As of 2022, he is 47 years old. He is the son of a secretary turned screenwriter and film producer mother, Wendy, and a construction worker and cooks father, Vincent Maguire. He has four half-brothers, two from either side of his parents.

As a child, he had to move from one town to another to live with each of his parents and other family members. He wanted to be a chef as a child but his mother didn’t seem to like the idea of him enrolling in home economics so she offered him $100 to take drama classes, so he chose acting as a career.

As he had to move from one town to another multiple time, he dropped out of high school and pursued an acting career.

Maguire debuted in a feature film – The Wizard in 1989 but he had no lines in the film. He worked as a child actor in 1990 and a teenager in 2002 which was much younger than his chronological age. He was cast as the lead in a TV series named Great Scott, which was unfortunately canceled in five weeks.

He did many auditions where he found Leonardo DiCaprio, who was auditioning as well. They soon became good friends and helped each other in getting roles in their works. He started hard partying and suffered from alcoholism, but soon sought help for his drinking problem from Alcoholics Anonymous.

Tobey Maguire has starred in the Spider-Man trilogy, from which he received lots of attention and made him a star. He also provided his voice of Spider-Man for the video game adaptations of the films. He was nominated for his role in Satan’s Alley for the Oscar Awards as the Best Actor.

He was the executive producer for the movies including 25th Hour (2002) and Whatever We Do (2003). He co-produced Good Producer in 2012. Later that same year, he established his own production company called Material Pictures.

Tobey was rumored to have been playing tournament poker since 2004 and had been trained by professional Daniel Negreanu.

During the shooting of Spider-Man, he was rumored to be dated his Spiderman co-star, Kirsten Dunst in 2001.

He has an athletic build with a chest size of 40 inches, a waist size of 30 inches, and biceps of 14 inches.

He has blue-colored eyes and dark brown hair color.

How did ‘Spiderman: No Way Home’ actor Jacob Batalon lost over 100 pounds?