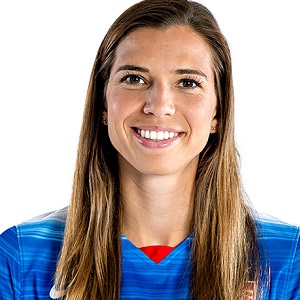 It's really neat when you become a role model. It's also a lot of responsibility. But if you see it as a platform where you can pour into others for Jesus with love, that's where I want to be. Becoming known or noticed in my sport isn't what drives me to work hard and want to be the best I can be. It's Jesus. That's why I play. I play to glorify Him. I worship Him with the gifts I've been given

One of my favorite things about soccer is how the art and the passion of the game somehow unites people and nations and classes and races. That's something that comes out of the game and how it's displayed and why people enjoy watching it and supporting it.

Talking about the relationship status of Tobin Heath, she is dating Christen Press. Her girlfriend is an American soccer player and she is her teammate.

The couple is dating since 2019 and is still together.

Who is Tobin Heath?

She is FIFA Women’s World Cup both silver and gold medalist as well as she was voted the USA’s best player in 2016.

She is currently playing for the Arsenal team of the National Women Soccer League (NWSL). Previously, she was with Portland Thorns (2013-20) and Manchester United.

Tobin Heath was born on 29 May 1988 in Basking Ridge, New Jersey, United States. She is 33 years old. Her nationality is American and her ethnicity is Caucasian.

Her birth name is Tobin Powell Heath. She was born to parents Jeff (father) and Cindy Heath (mother). She has a younger brother Jeffrey and two older sisters Perry and Katie who were also in athletics.

Heath was named after her great-grandmother’s last name.

Heath graduated from Ridge High School and attended as communications major from the University of North Carolina.

Here she left a tremendous remark winning the NCAA Women’s Soccer Championship in 2006, 2008, and 2009 as well as Atlantic Coast Conference titles four times in a row.

Tobin Heath made her presence known to the world when she made her international debut for the senior team on January 18, 2008, against Finland. Although being the youngest player she had won her 1st Olympic Gold Medal.

Then in 2009, she was named the US Soccer Young Athlete of the Year Female. She had suffered a major ankle injury that required surgery while playing from Atlanta Beat and took a long rest.

In 2012 she joined the game after recovering from her injuries and led to winning again another Olympic Gold Medal in London. She enjoys all the traveling she gets to do as an international player but also gets homesick at the same time.

She had played numerous national and international games scoring a goal for her team and the country. Further, she became the first women player along with her team who has been featured in EA Sports’ FIFA Video game series in FIFA 16.

She has a net worth of $1.5 million according to the 2021’s sources but her salary is not revealed yet.

Moreover, she endorses different brands including Nike. She promotes a fashion venture re__inc with her girlfriend.

Due to a lack of information about her relationship status, some rumors about her being gay could be heard.

Tobin Heath has a height of 5 feet 6 inches and her body weighs 59kg. She has golden-brown hair and brown eyes.