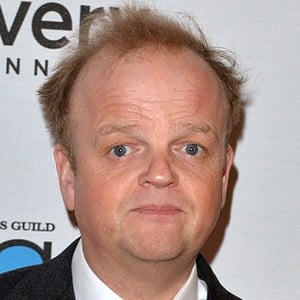 It's hard to imagine anyone interested in film not being a fan of Alfred Hitchcock because he's such a key influence on the entire history of cinema - it's hard to escape his shadow.

I didn't sound anything like Capote at the screen test. It was more like Bob Dylan. In his early years. With the flu.

There are things that I would avoid, so I have the choice to say no, when I feel I'm repeating myself too much. But then there could be a reason to do that with a good director. So I think actors have to have a loose philosophy.

There's something in the rhythm and roll of it that is connected to the way Hitchcock thinks and moves. Then there is everything he ingested - the cigar smoking and drinking that's imprinted on his voice.

The prosthetics were interesting because the artist was so good that they could just put a Hitchcock mask on me, but you don't want to do that. You're an actor playing Hitchcock, so it's about how much of that you're going to do.

Toby Jones is a married man. He is married to Karen Jones. They married in 2014. Additionally, they have two children from this relationship, Madeleine Jones, Holly Jones. Jones’ marriage is going strong as there is no news regarding any extramarital affairs at present.

Who is Toby Jones?

Toby Jones is an English actor. People mostly know him for his role as Truman Capote in the biopic ‘Infamous’. Additionally, he has also appeared in movies including ‘The Mist’, ‘Frost/Nixon’, ‘Captain America: The First Avenger’, and ‘Tinker Tailor Soldier Spy’ among others.

Jones was born as Toby Edward Heslewood Jones in Hammersmith, London on September 7, 1966. He was born to parents Freddie Jones and Jennie Heslewood. Additionally, he has two brothers, Rupert who is a director and Casper (actor). He became interested in acting since his childhood years. He is of English and British nationality. Furthermore, he belongs to the English ethnic background.

Jones landed his first major role in ‘Orlando’ as Second Valet in 1992. Additionally, he portrayed the role of Sgt. Protheroe in the TV series ‘Lovejoy’. He played Griffin in ‘Mystery! Cadfael’ in 1994. He also appeared in the TV series ‘Performance’. In 1998, he appeared in ‘Les Misérables’, ‘Cousin Bette’, ‘Out of Hours’, and ‘Ever After: A Cinderella Story’. Since then, he has appeared in numerous other movies and television series. All in all, he has over 100 credits as an actor.

Some other movies and television series that Jones has appeared in are ‘Jurassic World: Fallen Kingdom’, ‘Naked Normandy’, ‘Detectorists’, ‘Zoo’, ‘Journey’s End’, ‘Second Chance Summer: Tuscany’, ‘Sherlock’, ‘Kaleidoscope’, ‘The Secret Agent’, ‘Wayward Pines’, ‘The Man Who Knew Infinity’, ‘Tale of Tales’, ‘Agent Carter’, ‘Muppets Most Wanted’, ‘Leave to Remain’, ‘Murder on the Victorian Railway’, ‘Snow White and the Huntsman’, ‘The Hunger Games’, ‘My Week with Marilynn’, ‘Your Highness’, ‘God in America’, ‘Doctor Who’, ‘Creation’, and ‘The Old Curiosity Shop’ among others.

Jones garnered the Golden Globe Award nomination in 2013 for his performance in ‘The Girl’. Additionally, he has also received Primetime Emmy and Nominee BAFTA TV Award nominations. All in all, he has 10 wins and 16 nominations to his name to date.

Jones has not revealed his current salary. However, he has an estimated net worth of around $ 3 million at present.

Although Jones’s characters in several movies have been criticized he himself has not been part of any notable controversies to date. At present, there are no rumors concerning his life and career.

Talking about his body measurement, Jones has a height of 5 feet 5 inches (1.65 m). Additionally, he weighs around 70 kg. Furthermore, his hair color is dark brown and his eye color is blue.

Also find out more about another British actor and writer, Mackenzie Crook.