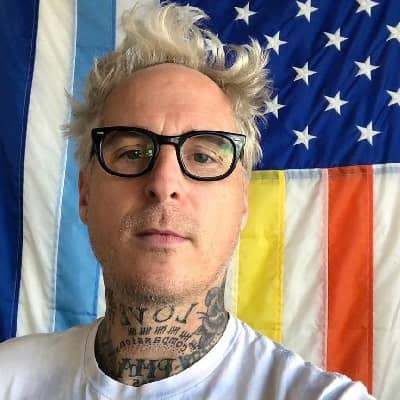 Toby Morse is a married man. His wife’s name is Moonie Morse. The couple met for the first time at a show in Washington DC in 1992 after then they started dating.

Together the couple has also a son named Max. Furthermore, he is currently enjoying his blissful life with her wife and children in Los Angeles, USA.

Who is Toby Morse?

Toby Morse is an American musician and motivational speaker. He is a vocalist of the Punk rock band H2O. Also, he was the vocalist of hardcore punk group Hazen Street.

He is best known for his band’s positive mental attitude-centric songs including “One Life, One Chance.”

Toby was born on April 8, 1970, in Taunton, Massachusetts, United States. He holds an American nationality and belongs of Caucasian descent.

When he was three years old, his father passed away due to a rare heart condition and he was raised by his mother. However, he hasn’t yet disclosed his parent’s identity in the media.

He is the youngest one among three children of his parents. His elder brother named Todd Morse is also the Los Angeles-based singer, songwriter, and multi-instrumentalist. Todd is a guitarist of H2O.

At the age of 12, Morse joined skateboarding and punk music classes. Also, his siblings taking him out to shows of bands such as Descendents and The F.U.’s from where he takes interest in music.

Toby moved to New York City in 1988 to be near its hardcore punk scene. That year, he sang backing vocals on Gorilla Biscuits’s album Start Today. In 1989, he started to begin a roadie, a member of a crew who travels with a band on tour as technicians or support personnel.

He served for the various bands as a roadie such as Gorilla Biscuits, Killing Time, Sick of It All, and so on. After staying with them for several years, Morse formed a band named H2O along with Rusty Pistachio and Eric Rice.

In December 1994, they played their first show and also became part of the New York hardcore scene. In 1996, the band released its first album H2O. A year after, they released their second album titled Thicker than Water.

In 2004, he involved in the band, Hazen Street and released their debut album of the same name as their band.

Similarly, the objectives of an organization are to inspire kids to make healthy life choices maintained a PMA, be themselves, and avoid peer pressure. He has also his own clothing merch called Stright Edge OG (stylized as SXEOG).

To date, Morse hasn’t been part of any sorts of rumors and disputes that create headlines in the media. Also, he stays miles away from such controversial acts that hamper his personal and professional life.

Once he tweets that he wished he had no tattoos on his body because people think that he is a tough guy.

Morse might have earned a handsome amount of wealth throughout his profession as a singer and songwriter. However, he hasn’t yet disclosed his actual net worth, salary, and other assets in the media.

The musician is a tattoo lover, his all body is covered by tattoos including his head. He has brown pair of eyes with brown hair color. Further, his other body measurement is not available including his height and weight.