Todd Chrisley is an American businessman and a reality star of his show, Chrisley Knows Best. Todd is married to Julie Chrisley since 1996 and has five children. 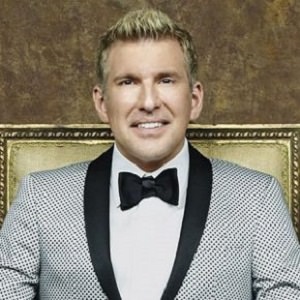 Ignorance I can fix, stupid is forever.

There ain't nothing open after midnight except legs and the ER and he's going to stay out of both of them.

So Spencer, don't plan on doing anything with my daughter that you wouldn't do with me.

Todd Chrisley has been married twice in his life.

His first wife was Teresa Terry. They were blessed with two children Kyle Chrisley and Lindsie Chrisley. There is no information about their dating history and marriage date. Todd and Terry divorced in 1996.

After that, Todd Chrisley married his second wife, Julie Chrisley on 25 May 1996. Julie is also a famous reality star and appears on the show Chrisley Knows Best.

Todd and Julie have been married for over two decades now and their relationship is going very well.

Who is Todd Chrisley?

He is also a self-made millionaire businessman. Previously, he was active in other TV series such as Steve Harvey and The Domenick Nati Show. He is the husband of the famous reality star, Julie Chrisley.

Todd Chrisley was born on 6 April 1969, in Georgia, USA. His nationality is American but his ethnicity is German.

His birth name is Michael Todd Chrisley. He is the son of Faye Chrisley(mother) and Gene Raymond Chrisley(father). His father passed away on 11 July 2012. He has two siblings named Randy Chrisley and Derrick Chrisley.

His educational background is unknown. He usually doesn’t talk about his private life in the media and public. Todd prefers people focusing on his work rather than his personal life.

Todd Chrisley has appeared in several reality shows. He got worldwide fame when he starred in the reality television series, Chrisley Knows Best. In addition, he is also the producer of the series. He appears in the series with his wife and five children. He is the patriarch of the Chrisley family.

Todd is seen as a strict and tough father and knows how to keep his family in line. Previously, he appeared on the American talk show The View in 1997.

He also appeared in the reality television reality series Steve Harvey in 2012. Since 2014, he appears on his own show with his family. The show is currently running its fifth season.

This TV star has an estimated negative net worth of $5 million. But his salary and other earnings are unknown.

Todd Chrisley has been involved in a few controversies in his life. His first wife Teresa Terry claimed that Todd physically as well as mentally abused her several times during their married life.

She then filed a case of domestic violence against him. Many people criticized him for Teresa’s statement. He became a big part of a controversy after the case.

Todd Chrisley has a height of 6 feet 1 inch. His body weighs 78kg. He has blond hair and blue eyes.