Fun and always ready for the prank, Toddy Smith is a social media star. Toddy has many friends and his Instagram account is an entertainment doze! 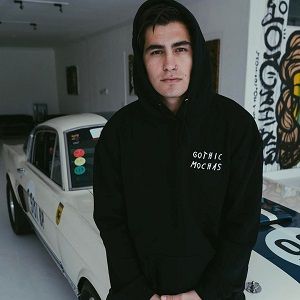 Toddy Smith is in a relationship with his longtime girlfriend Corinna Kopf. They dated for a couple of years and then broke up due to unknown reasons. However, they are still in touch with each other even after the separation and has collaborated in different videos together.

Furthermore, they have been also spotted together on their social media accounts as well as in public. Talking about his past relationship, there is not even a single rumor of affair of him. Currently, Toddy and Corinna are enjoying their love life and living beautifully.

He has uploaded pictures with Carly Incontro and seems like they have a good friendship as well.

Who is Toddy Smith?

Toddy Smith is a widely famous Instagram and YouTube star. He uploads influential videos on his channel. Previously, he was a bartender and later he turned to a Vine star. Moreover, he was one of the top three contestants of Sweet Home Alabama, season 4.

Toddy was born on April 11, 1991, in Huntington Beach, California, United States of America. His current age is 28.

Talking about his nationality, he is American and his ethnicity is English. There is not any information regarding his family background. However, through sources, it is known that he is very close to his mother and keeps uploading pictures with her.

Toddy Smith has a younger sister named Sophia. Moving towards his education, there is not any information regarding his educational background.

Toddy began his career as a Viner. Prior to YouTube, he was a successful Viner with 330,000 followers. Later, he started posting various videos on his channel. His first video was “Dat 151 rum,” published on March 19, 2013.

Furthermore, Toddy Smith has earned more than 1 million subscribers on his YouTube channel. Being a social media star, he has more than 2 million followers on Instagram, over 991k followers on Twitter.

So far, he has collaborated on Vine with a couple of social media stars including Alex Ramos, Tyler Joseph, and Gary Rojas.

Some of Toddy Smith’s most-watched videos are David Dobrik’s 21st Birthday, Spotted Alex Ernst Doing This, Reacting Too Rodd From David’s Vlog, Caught Them Doing Stuff, and Girlfriend Tag with Corinna Kopf. He has around 42 million views in total on YouTube.

Toddy has also featured in the reality show Sweet Home Alabama. In the show, men compete for the love of an attractive southern belle and there is tough competition between countrymen and city slickers. Smith appeared in the show’s 4th season. However, he was eliminated after qualifying for the Top 3.

Toddy and his best friend, Darren Nuzzo who is a California-born writer and stand-up comedian are both releasing a book together called I’ll Give You a Dollar If You Consider This Art.

Being a famous Instagram star and YouTuber, he earns a decent amount of money from his profession.

However, his salary is unknown but has a net worth of around $500 thousand.

So far, there are not any drastic rumors regarding his personal and professional life. Moreover, Toddy Smith has never faced any controversy in his career to date.

It seems he has full focus on his career rather than stuck in any controversy.

Toddy Smith has a towering height of 5 feet 10 inches and his weight is 78 kg. Furthermore, he has a pair of attractive brown eyes and brown hair.

In addition, he also runs a YouTube channel on which he has gained over 1.09 million subscribers.

Also get to know about the birth facts, career, net worth, body measurement about famous personalities like Kristen McAtee, Maverick Baker, Alexis Ren.