Tolulope Ogunmefun is a married man. He exchanged his vows with his longtime girlfriend Yemisi Olayemi on 28 August 2016, at Gosfield Hall, London.

This couple met each other for the first time in 2007 during their college time. 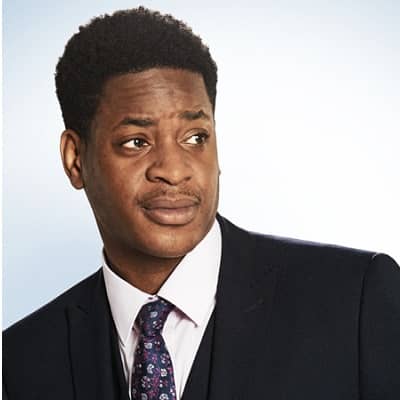 Tolulope Ogunmefun is an English television actor, and social media personality. He is best known as Nate in the television series Man Like Mobeen.

This actor was born on 29 March 1989, in London, the United Kingdom. He belongs to African-American descent.

There is no information about his father, mother, and siblings, as he likes to keep his personal life far from the camera. He attended St Bonaventure’s school in Forest Gate.

He graduated with a Bachelor’s degree in Film Studies from Anglia Ruskin University.

Tolulope Ogunmefun is always interested in sports, especially basketball. Earlier, he played for his school and college team. He played in a team in Houston, Texas for a short period of time.

Ogunmefun was also interested in comedy and acting from an early age. One day, he randomly made a comical video named ‘don’t jealous me’ with his friends. Afterward, his friends uploaded that video on social sites and it went viral.

He caught public attention after the video went viral. Afterward, on 26 November 2008, Tolu started his own comedy series ‘Don’tJealousMe‘ in front of a web camera. This series contains acts, songs, challenges, and parodies.

The successes of his series helped him garnered over 176 K subscribers with around 43 million views on his YouTube channel. He is respected as one of the most popular and searched African comedian. The increasing fan base led him to tours around the UK and the US.

In 2014, he played the main role of T-Boy in the television comedy series The T-Boy Show. Earlier, between 2011-2013, Tolu starred as Cousin Femi in the international hit sitcom Meet The Adebanjos.

Since 2017, he is in a recurring role as Nate in the comedy-drama series Man Like Mobeen. Recently, he is also working on his comic YouTube channel ‘DntJealousMe‘.

Tolulope Ogunmefun: Salary and Net Worth

The salary of this artist is under review. Meanwhile, according to some sources, Ogunmefun has an estimated net worth of $1 million.

There is no scandal and rumor about this comedian. Meanwhile, Tolu has managed to keep himself out of any controversy and rumor. He is doing well in his career.