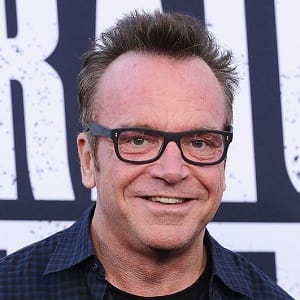 The nature of show business is people within the business feel that if someone else fails, they move up a notch

Environmentalists have a very conflicted relationship with their cars.

[on Roseanne Barr] She actually had 'Property of Tom Arnold' tattooed on her hip, which made me the fourth largest property-owner in California.

What is the relationship of Tom Arnold?

Tom Arnold has been married a total of four times. He was previously married to comedian Roseanne Barr after they met when she saw his act in 1983. They married on 20 January 1990 and later divorced on 9 December 1994. From 22 July 1995 to 30 March 1999, Tom was married to Julie Armstrong.

Arnold was married to Shelby Roos from 29 June 2002 to 19 August 2008. Currently, Tom is married to Ashley Groussman Arnold. The pair married on 28 November 2009. Their marriage is going strong as there is no news regarding any extramarital affairs at present. They have two children together: Quinn Sophie Arnold and Jax Copeland Arnold.

Who is Tom Arnold?

Tom Arnold is an American actor and comedian. People mostly know him for his appearance in ‘True Lies.’ Additionally, he has appeared in other numerous movies and television series like ‘Nine Months’, ‘McHale’s Navy’, ‘Cradle 2 the Grave’, ‘Happy Endings’, and ‘The Great Buck Howard’ among others.

Arnold was born Thomas Duane Arnold in Ottumwa, Iowa on March 6, 1959. He was born to parents Linda Kay and Jack Arnold. Additionally, he has six siblings. He and his siblings were raised by their father after his mother abandoned the family when he was a child. He had a rough childhood as he has revealed that he was sexually abused from age 4–7 by a male babysitter. Tom is of American nationality. Furthermore, he belongs to a mixed ethnic background of English, Swedish, German, Irish, and Scottish.

Talking about his education, Arnold attended Ottumwa High School. In addition, he also attended Indian Hills Community College and the University of Iowa. He studied business administration and writing.

Arnold initially began doing stand-up comedy. In 1991, he appeared in the movie ‘Freddy’s Dead: The Final Nightmare.’ Additionally, Tom had the role of Howard Peterman in the TV movie ‘Backfield in Motion’ in 1991. In 1992, he appeared in ‘A Different World.’ Similarly, he had roles in ‘The Woman Who Loved Elvis’, ‘Coneheads’, ‘Body Bags’, ‘The Larry Sanders Show’, and ‘Undercover Blues’ in 1993. Since then, he has appeared in several other movies and television series. At present, he has more than 150 credits as an actor.

Some other movies and television series that Arnold has appeared in are ‘Pegasus: Pony with a Broken Wing’, ‘1 Interrogation’, ‘Saving Flora’, ‘Aussie Girl’, ‘NCIS: New Orleans’, ‘Funny You Should Ask’, ‘Maximum Impact’, ‘Dead Ant’, ‘Trailer Park Boys’, ‘Childrens Hospital’, ‘The Curse of Downers Grove’, ‘Workaholics’, ‘Sin City Saints’, ‘Mission Air’, ‘Dumbbells’, ‘All I Want for Christmas’, ‘The First Family’, ‘Hot in Cleveland’, ‘Funny or Die Presents…’, ‘Easy to Assemble’, ‘Hit and Run’, ‘Madea’s Witness Protection’, ‘A Christmas Wedding Tail’, ‘Sons of Anarchy’, ‘Franklin & Bash’, ‘Knockdown’, ‘Hard Breakers’, ‘Endure’, ‘The Jerk Theory’, ‘The Replacements’, ‘Moonlight & Mistletoe’, ‘Gardens of the Night’, and ‘The Year of Getting to Know Us’ among others.

Arnold garnered the American Comedy Award nomination in 1995. Additionally, he has won the Vanguard Award in GLAAD Media Awards. In addition, Arnold has also won the Satellite Award and Streamy Award.

Arnold has not revealed his current salary. However, he has an estimated net worth of around $ 30 million at present.

Arnold became part of a controversy after he revealed that Apprentice producer Mark Burnett ‘choked’ him at an Emmys party. Additionally, his criticism of Leeann Tweeden also made the news. At present, there are no rumors concerning Arnold and his career.

Talking about his body measurement, Arnold has a height of 6 feet 1 inch (1.85 m). Additionally, his hair color is dark brown and his eye color is light brown.