Tom Brady is an American football quarterback. He is married to the beautiful Brazilian fashion model and actress, Gisele Bundchen, and has three kids.

Tom Brady is a married man since 2009. He is married to the beautiful Brazilian fashion model and actress, Gisele Bundchen.

They met on a blind date arranged by their mutual friend. And then they started dating. After dating each other for a few years, they got married on 26 February 2009.

They have been married for over 11 years and they are still together. They together have a son and a daughter named Benjamin Brady and Vivian Lake Brady. They are living a happily married life and there is no sign of divorce at all.

Talking about his previous relationships, Tom dated the beautiful American actress, Tara Reid for a year back in 2002.

After that, he was in a serious relationship with the gorgeous American actress, Bridget Moynahan. They started dating each other back in 2004.

They had their first child, John Edward Thomas Moynahan in August 2007. After being in the relationship for over two years, they broke up in 2006. 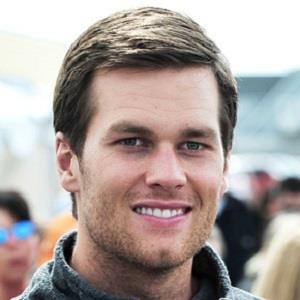 I could talk food all day. I love good food.

Sometimes, getting up in the morning and brushing your teeth is the hardest part of the day - it all just hurts.

When you have two busy kids running around the house, returning e-mails is a task, let alone surfing the web.

I'm not making any comparisons. Coming down here and playing with this group of guys is amazing.

Who is Tom Brady?

Tom Brady is an American footballer who plays as a quarterback for the New England Patriots of the National Football League (NFL).

He is the only quarterback to win seven Super Bowls and the only player to win them all playing for one team.

He has also won four Super Bowl MVP Awards with the New England Patriots. Brady is a friend of the former American President Donald Trump.

He was born as the only son and fourth child of Galynn Patricia and Thomas Brady, Sr. His father owns a financial planning business.

He has three elder sisters named Nancy, Julie, and Maureen. His father is of Irish descent and his mother is of Norwegian-Swedish and Polish ancestry.

Tom attended Junípero Serra High School in San Mateo, California as a child and later attended the University of Michigan where he played football from 1995 to 1999.

During that time, he was an intern at Merrill Lynch Wealth Management. In 2003, he was inducted into the Junipero Serra High School Hall of Fame.

After graduation, Tom was selected by the professional American football team, New England Patriots in the sixth round of the 2000 NFL draft.

After playing as an extra for few seasons, he became their starting quarterback. As a New England Patriots player, he has won two league MVP awards, first in 2007 and second in 2010.

He played with New England Patriots his entire life and he is one of the most successful American footballers of all time.

Brady has been honored with four Super Bowl MVP awards till now and he has been selected to 12 Pro Bowls. He has led his team to 14 titles, more than any other quarterback in NFL history.

In 2016, he became the fourth all-time in career passing yards and third in career passer rating. Brady is considered one of the greatest quarterbacks of American football history.

Tom is one of the highest-paid American footballers, with a salary of $25 million per year.

His net worth was $180 million(2017) while, Gisele Bündchen’s wife has made $380 million in her respective career as a supermodel.

There is no rumor of Tom’s current love affair with another woman. He was rumored to have hooked up with Britney Spears, an American singer back in 2002 but he didn’t disclose the news to the media.

Tom has an athletic body with a height of 6 feet 4 inches. His weight is 102 kg.

His hair color is light brown and his eye color is blue. He wears an 11-12(US) shoe size.