Artist Tom Chambers is married and a father of two. 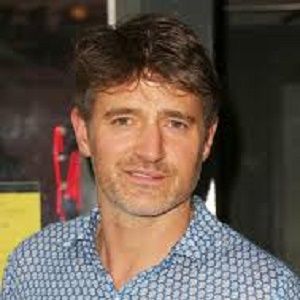 There's no such thing as cool, only practising something over and over again until it's made to look easy.

Tom Chambers is a married man. He is married to his longtime girlfriend, Clare Harding. The couple tied the knot in 2008.

Both of them are blessed with two children (Olive & William Chamber).

Moreover, the Chambers family is living happily and they are spending more time with their kids.

Who is Tom Chambers?

Tom Chambers is an English actor who is famous for his role as Sam Strachan in the BBC medical drama Holby City and Casualty and as Max Tyler in the BBC drama series Waterloo Road.

He was born on 22 May 1977 as Thomas Stuart Chambers in Darley Dale in Derbyshire, England. His ethnicity is English.

Tom’s father is Stuart, a chartered accountant, and his mother Rosie, a housewife. He has four siblings.

He was raised in a small village called Darley Dale in Derbyshire.

He attended Repton School. In between school and holidays, he used to attend the National Youth Music Theatre.

As well, he learns a three-year musical theatre course at Guildford School of Acting.

At first, Tom Chambers began his career through acting and dancing. In the British film Fakers, he starred opposite Matthew Rhys and Kate Ashfield.

Moreover, it was announced by Denise Welch on Loose Women that Chambers would be joining the fifth series of BBC drama, Waterloo Road as new Executive Head Teacher, Max Tyler, where he appeared in ten episodes in May 2009.

Chambers starred in the stage version tour of Top Hat in November 2011. He portrayed Inspector Sullivan in the BBC TV’s Father Brown in two series (25 episodes) in 2014-2015.

Furthermore, Chambers returned to singing and dancing, starring as Bobby Child in 2017-2018, alongside Clare Sweeney and Charlotte Wakefield, touring the UK in the Watermill production of Crazy For You, the George and Ira Gershwin musical.

In early 2009, the pair has since appeared on the Strictly Come Dancing tour dancing the Quickstep and the Samba. Chambers participated in the Christmas special, with professional dancer, Oti Mabuse in 2015. He joined the cast of the BBC drama Waterloo Road in May 2009.

In the week of 25 October 2009, his first episode 1 of the fifth Series which first aired the portraying Executive headmaster Max Tyler.

He was nominated in What’s on Stage Award for Best Actor in Musical.

He has received the sixth season of Strictly Come Dancing with his partner Camilla Dallerup.

According to fellow competitor Lisa Snowdon, the statement ” Tom Chambers should not have been allowed to dance in the final” causes controversy between them.

He earns a huge amount of money and has an estimated net worth of $3 million.

Tom Chambers has an average body with brown hair and green eyes. Besides, he is 6 feet tall with a bodyweight is of 72 kg.