Tom DeLonge is the vocalist and guitarist who plays for the rock band 'Blink 182'.

Tom DeLonge is currently in a relationship. He is dating a girl named Marie. On December 19, 2019, he posted a photo on his Instagram and also mentioned that they were together on a tour and have been dating for the past 2 years.

There is not much information about who she exactly is as Tom has not tagged her in any photos. She probably is not active on Instagram.

She does have two children from her previous relationship. Also, he has revealed that Marie is four years younger than him.

Previously, he was married to Jennifer Jenkins. The couple got married on May 26, 2001, in Coronado, California on San Diego Bay. They had dated since 1996 as they had been friends since high school.

The band Jimmy Eat World performed at their wedding reception. The couple was blessed with a daughter on July 15, 2002.

They named her Ava Elizabeth DeLonge. And on August 16, 2006, they were blessed with a son named Jonas Rocket DeLonge.

However, after nearly two decades of marriage, Tom DeLonge filed for divorce from Jennifer DeLonge in San Diego County Superior Court in 2019. 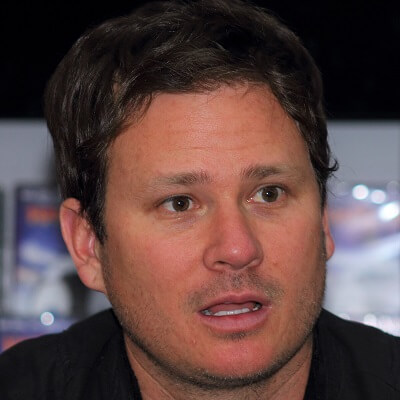 We were bored and we couldn't get chicks. So we decided if we'd be in a band, that would take care of two problems at once.

Who is Tom DeLonge?

Tom DeLonge is the lead vocalist and guitarist of the popular rock band Blink 182‘. Moreover, he is also an author, actor, record producer, and filmmaker which makes him a multitalented artist.

His band ‘Blink 182’ is famous for making the number one albums and hit songs like ‘Adam’s Song’ and ‘All the Small Things.

Tom DeLonge was born on  December 13, 1975, to parents, Thomas DeLonge Sr. and Connie DeLonge in Poway, California. His birth sign is Sagittarius and his current age is 46.

He has one brother and one sister named Shon DeLonge and Kari DeLonge respectively. His father Thomas worked for an oil company as an executive and his mother Connie worked as a mortgage broker.

Delonge was interested in music since his childhood but was not sure about pursuing it as a career. His initial aim was to be a firefighter. He was more interested in skateboarding. His ethnicity is Mexican, English, and German.

Regarding his education, he first attended Poway High School but was expelled in the second half of his junior year. He then enrolled in Rancho Bernardo High School.

DeLonge formed the band Blink-182 in 1992 along with his school friends Kerry Key and Anne Hoppus. The band appeared in several band competitions. They used to practice together for several hours in Raynor’s bedroom.

Furthermore, they used to perform in clubs and local High schools. Eventually, the band was signed by Cargo Records on a ‘trial basis.

In 1995, they released their first studio album called ‘Cheshire Cat’ but made very little impact commercially. Then they started performing nationwide for a year.

Two years after their first studio album, they released another album called ‘Dude Ranch’ which went on to sell over a million records.

After their first success, the band went on to release another album called ‘Enema of the State’ which became a massive hit and sold over 15 million records worldwide.

A single song called ‘All the Small Things from the record became a crossover hit and peaked at 6th spot on the Billboard Hot 100 chart.

In 2001, the band released a new song called ‘Take Off Your Pants and Jacket’ which debuted at the number 1 spot in the United States.

Similarly, the band released several other hit songs like ‘The Rock Show’, ‘Stay Together for the Kids’, ‘First Date’, ‘I Miss you, and many more.

The band broke up in 2005. After breaking up with the band he formed another band, ‘Angels & Airwaves, and has released five studio albums.

He did reunite with his old band members in 2009 and released some new music and did tours. However, the band once again broke up in 2015.

Aside from music, Delonge is also involved in the business. He established the clothing brand, Atticus Clothing in 2001 along with Hoppus and his childhood friend Dylan Anderson.

In 2002, he founded Macbeth Footwear, a rock, and roll-inspired shoe company.

Furthermore, he is also an actor and has appeared in many films and TV shows like ‘American Pie, ‘Idle Hands’, ‘Two Guys and a Girl, and ‘MadTV’.

Tom DeLonge has an estimated net worth of around $70 million. He made most of his income from the sale of his albums.

Likewise, he is also a businessman and is the founder of the technology and design firm Modlife. Similarly, he is also an actor and has appeared in various documentaries and films.

Blink-182 is one of the most recognizable brands of all time with hits like ‘All the Small Things and have sold over 50 million albums in the world.

In 2015, blink182’s singer Mark Hoppus and drummer Travis Barker announced that Tom had left the band and was no longer in the band.

However, controversy sparked when Delonge posted on his Instagram responding that he had not left the band and termed it as ‘dysfuncti0nal’.

Tom is a tall guy with a height of 6 feet 3 inches and weighs around 87 kg. Similarly, he has brown hair with black eyes.

You may also like to know more about the Bio, Age, Career, Relationship, and Net Worth, of Chris Daughtry, Jennifer DeLonge, Matt Skiba, and Deana Carter