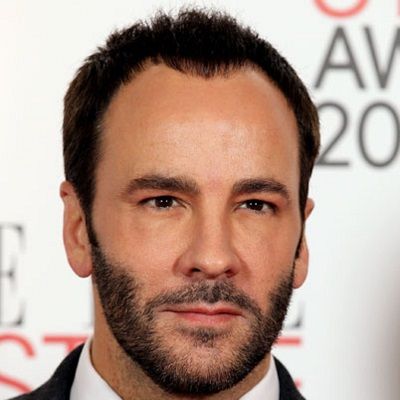 I am hoping for a Democratic president - though a female President won't be able to wear my clothes because they're too expensive. And I think that's absolutely right.

Maybe I'm old fashioned, but I think there needs to be - I don't really like the word moral - a moral to the story. You need to think about it. Things can be entertaining, but if you leave the theater and it doesn't stay with you, doesn't haunt you, doesn't challenge you, then it's not successful, for me. So I hope to make films that make one think.

I'm a pretty calm person. That came from living in Italy for a long time. Nothing works, nothing is on time. You have to learn to deal with it.

What is the relationship of Tom Ford?

Tom Ford is gay with his partner, Richard Buckley, who is a journalist. They have been together since 1986 but only three years after being together, Buckley was diagnosed with cancer. After his partner recovered, they moved to Italy and had a son called, Alexander John Buckley Ford, who was born on September 2012.

Who is Tom Ford?

Tom Ford is an American fashion designer and filmmaker. Also, he launched his eponymous luxury brand in 2006, having previously served as the Creative Director at luxury fashion houses Gucci and Yves Saint Laurent.

Likely, Ford also directed the Academy Award-nominated films A Single Man (2009) and Nocturnal Animals (2016). Currently, he serves as the Chairman of the Board of the Council of Fashion Designers of America.

Tom Ford was born in Austin, Texas, the United States on August 27, 1961. His birth name is Thomas Carlyle Ford and he is currently 60 years old. His father’s name is Tom Ford Sr. and his mother’s name is Shirley Burton. He spent his early life in Houston, San Marcos, and Santa Fe.

He has a sister namely, Jennifer Ford. Tom holds American citizenship, but his ethnicity is unknown. His birth sign is Virgo.

In which school did Tom Ford attend?

Talking about Tom’s education history, He studied at St. Michael’s High School and at Santa Fe Preparatory School, from where he graduated in 1979. He enrolled at Bard College at Simon’s Rock and then moved to the Big Apple to study art history at New York University (NYU).

He began to focus on acting for television commercials and dropped out of NYU after only one year. He then began studying architecture at Parsons The New School for Design.

Talking about his profession, after he graduated from university, he was keen on working for Cathy Hardwick, an American designer. He called her every day in the hope of securing a job under her one day, and so he did. He worked with her as a design assistant for two years

In the year 1988, he worked at the clothing brand, Perry Ellis, with whom he worked for two years. However, he grew tired of American fashion and decided to venture out into the world of European fashion which according to him, was ‘classier’.

In 1992, he took over as Gucci’s design director and within a matter of months expanded menswear and other apparel sections. He also led the brand’s press-a-porter fragrances, image, advertising, and store design. In the year 1995, Gucci came out with an IPO on the strength of Ford’s designs.

Whereas, his advertising campaigns for YSL fragrances became extremely famous due to their bold yet creative arty expression. This catapulted both the fashion houses back into the limelight.

After he left Gucci, he launched a new line of beauty, eyewear, accessories, and menswear, which he introduced under the ‘Tom Ford label two years later.

In 2005, he announced the opening of his film production company, ‘FADE TO BLOCK’, and made his directorial debut with the film, ‘A Single Man, in the year 2009.

Tom Ford has an estimated net worth of around $500 million as of 2022, and she has earned that sum of money from her professional career.

Tom has not been involved in any rumors and controversies in his personal and professional life.

What are the body measurements of Tom Ford?

Tom Ford has a height of 6 feet and he weighs is 77Kg. Tom’s hair color is dark brown and his eyes color is light brown.