Tom Hane is currently in a relationship. His girlfriend is Kamila Angelika. Their relationship began on August 22, 2012.

One of the most romantic couples Tom Hane and Kamila Angelika are often found expressing their love for each other on social media.

They have been in the relationship for nearly six years now and hope to get married to each other soon. 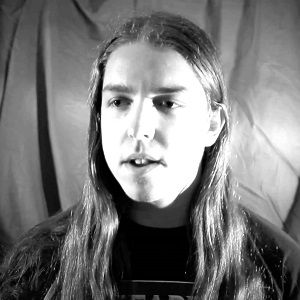 I truly believe there’s more good in this world than bad, it’s just time to stop glorifying the bad ones

All you’re doing by labeling people as ignorant is perpetuating hate and division. It’s time for EVERYONE to lift each other up instead of pointing fingers and blaming

I hate Pokemon. Sue me.

Who is Tom Hane?

Tom Hane is the former drummer of the metal band In This Moment. He joined the band in 2011 after the then drummer Jeff Fabb left the band.

The band released Blood(2012) and Black Widow (2014) and went on tours and fests throughout the US and Europe.

Tom too left the band in November 2014 exclaiming artistic differences and creative dissatisfactions. He is engaged in photography, videography, and graphics designing nowadays.

Tom Hane was born on February 19, 1990. He is from Crystal Lake, Illinois. He is a white American.

Tom was a music lover from his early childhood and he had begun drumming in 1993 when he was just 3years old. Information regarding his parents and siblings is unknown.

Tom Hane studied at Prarie Ridge High School. He graduated in 2008. Information on his college and university is unknown. He started working at Drum Pad when he was young. Drum Pad is a musical instrument store.

Tom Hane started his career as a drummer in 2007 joining the Band Thyateira. It is a metal band from Crystal Lake Illinois. The band has not recorded any albums to date. Tom left the band in October 2008.

He joined In This Moment in 2011 following the departure of the original drummer Jeff Fabb. The band released Blood in 2012 which was certified Gold, with sales of 500,000 copies by the Recording Industry Association of America in the Spring of 2017.

The Band simultaneously released its next album in 2014 named Black Widow. To promote the album the band performed for the Knotfest and Black Widow Tour the same year.

Tom Hane is a freelance photographer and videographer and graphics designer at the moment. His works are available on Photography by Tom Hane (http://tomhane.tumblr.com/).

As a band, Tom Hane and his fellow band members of In This Moment were nominated in the Alternative Press Music Awards 2017 in two categories namely Best Hard Rock Artist and Best Live Band awards.

The band was also nominated for Loudwire Music Award in the category Best Hard Rock Artist of the Year.

Details on Tom Hane’s salary and net worth are unknown.

Rumors spread in 2016 when Tom Hane decided to leave his band In This Moment expressing his dissatisfaction regarding his creative part of the band and the artistic difference.

Fans believe that Hane was actually dismissed from the band because he is still too young for the Blood Legions.

Tom  Hane is a white American with dyed blonde hair. His eyes are Blue. Information on his height, weight, and other body measurements is unknown.