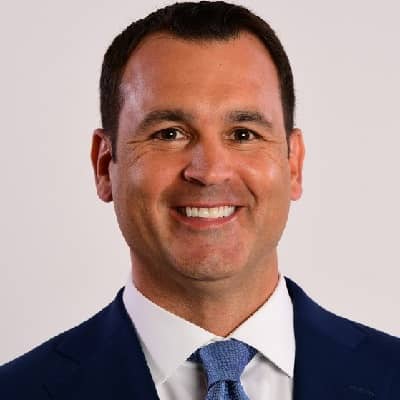 Tom Hart is a married man. He is married to Kate. The couple also has three children together. Although the names of the children aren’t disclosed.

Their married life is going on strong ever since without any rumors of a separation. As of now, the family is living happily together in Atlanta.

Hart has posted a lovely video of his daughter’s message to football fans on his Twitter page.

Who is Tom Hart?

Tom Hart is a sportscaster who is currently working for SEC Network. Previously, he worked for CBS, Fox Sports Radio, ESPN, etc.

He is also a former field reporter for Braves Live, a pregame/postgame show for the Atlanta Braves. Further, he has been the television broadcaster for the Georgia Tech Yellow Jackets football team.

Tom was born in the United States and raised along with his American parents.

Yet there are no details regarding his birthplace, birthdate. Further, he hasn’t disclosed the names of his father, mother, and siblings.

He holds an American nationality and belongs to mixed (German, English, and Irish) ethnicity.

He attended Rock Bridge High School in Columbia, Missouri and is a graduate of the University of Missouri.

Tom Hart has built his career as a former field reporter. He works on Braves Live, a pregame postgame show for the Atlanta Braves.

Hart has also been the insider on Fox Sports Radio from 2008 to 2010. Then he works for ESPN and The Big Ten Network calling college football and basketball from the year 2010 to 2012. He has also worked for CBS College Sports.

Tom was the sports commentator and studio host for Comcast Sports Southeast from 2003 to 2011. Serving as the broadcaster for two minor league teams: the Winston-Salem Warthogs and the Tennessee Smokies, he was appointed as a Director of media relations.

Tom joined SEC Saturday Night in 2017. Moreover, replacing Brent Musburger Hart was the play-by-play announcer. It features SEC Network’s marquee college football game each Saturday. He also works as a play-by-play commentator for other channels like ABC and ESPN.

Hart was one of the main voices on ESPN’s coverage of the NCAA College World Series. He was responsible for the coverage of the XFL in 2020, teaming up with Cubelic and analyst Joey Galloway.

Hart also calls select games and events for MLB, NCAA football, and also for the NBA. He continues his work for FOX Sports South and Sports South serving as pre and post-game host, and an on-field reporter for Atlanta Braves telecasts.

He occasionally guest-hosts The Paul Finebaum Show and College Football Live too.

This sportscaster has an estimated net worth of $1 million.

As of 2020, he receives an annual salary of $40,000 from his successful reporting career with SEC Network.

He seems to be in a low profile and doesn’t share much about his life. Hence, the announcer is far from any sort of rumors or controversy until now.

Tom Hart seems to have an average height and weight but their exact measurements are unknown. Looking at his images, he has black colored hair with dark brown colored eyes.