Tom Hiddleston at present is seeing an actress. The rumors of him dating Zawe Ashton are now confirmed and are the talk of the town.

They confirmed their affair after appearing together in 2021’s Tony Award. He and his girlfriend were often seen together hanging out in NYC and he even attended Zawe’s program out of his busy schedule in April 2019.

In addition, they were spotted together in an outdoor auction in New York in September 2019.

He has been in a number of relationships in his past. He dated the beautiful actress Kat Dennings for several months. He began dating Kat back in 2010 and they broke up later that year. He has also been in a relationship with Jane Arthy in the year 2013.

In 2015, he dated actress Elizabeth Olsen. Tom’s relationship with Jane was also proved to be a short-term affair. The couple broke up later the same year. After that, he began dating the famous American singer Taylor Swift in 2016.

The couple was together for a few months in 2016. 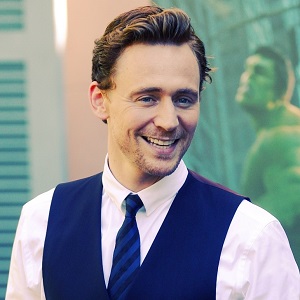 I grew up watching 'Superman.' As a child, when I first learned to dive into a swimming pool, I wasn't diving, I was flying, like Superman. I used to dream of rescuing a girl I had a crush on from a playground bully.

Who is Tom Hiddleston?

Tom Hiddleston is an English actor, producer, and musical performer.

His role in The Avengers earned him the 2013 MTV Movie Awards for Best Fight and Best Villain. He has also appeared in Steven Spielberg’s War Horse (2011), The Deep Blue Sea (2011), and the romantic comedy Midnight in Paris (2011).

Tom Hiddleston was born as Thomas William Hiddleston on 9 February 1981, in Westminster, London, England, UK. Tom is of British nationality and is of English, Welsh, German, and Scottish ethnicity.

He is the son of Diana Patricia Hiddleston, an arts administrator and former stage manager, and James Norman Hiddleston, a physical chemist.

His parents divorced when he was 12 years old. His younger sister Emma is also an actress and his older sister Sarah is a journalist in India. He was raised in Wimbledon in his early years and later moved to a Cotswold village near Oxford.

He attended the Dragon School, a preparatory school in Oxford.

At the age of 13, Hiddleston began boarding at Eton College. He continued on to Pembroke College at the University of Cambridge, where he earned a double first in Classics.

After that, she attended the Royal Academy of Dramatic Art to study acting, from which he graduated in 2005.

Tom began his career as a theater actor in 1999. His first acting role was as Captain Stanhope in the theater production Journey’s End in 1999.

In 2007, Tom won the Charleson Award Third Prize for his performance in Othello. For his role of Loki in the Marvel movie Thor, he won the Empire Award for Best Male Newcomer in 2012.

In late 2013 and early 2014, Hiddleston starred as the title character in the Donmar Warehouse production of Coriolanus. For his role in Coriolanus, he won the Evening Standard Theatre Award for Best Actor in 2014.

In 2016, he starred in and was an executive producer of the AMC / BBC limited series The Night Manager, for which he received two Primetime Emmy Award nominations for Outstanding Lead Actor in a Limited Series or Movie.

Also, he won his first “Golden Globe Award for Best Actor – Miniseries or Television Film.” Currently, he has filmed in the movie Avengers: Infinity War (2018).

Tom Hiddleston: Salary and Net Worth

Tom has been a very successful actor in his career. Throughout his successful acting career, he has accumulated a net worth of 20 million dollars as of 2022, but his salary is unknown.

Currently, there is no rumor of his love affairs. Tom has been highly criticized by the fans, audience, and other people for his Golden Globe Award speech.

After winning the award, he attempted to use his acceptance speech to bring attention to the civil war gripping South Sudan.

But in spite of his noble intentions, he was roundly criticized on social media by observers who found his remarks self-indulgent, tone-deaf, and just plain awkward. Later, he publicly apologized for his speech.

Tom Hiddleston has a height of 6 feet 2 inches. His body weighs 79kg. He has dark brown hair and blue eyes. His body measures 43 inches for chest size, 33 inches for waist size, and 14 inches for bicep size. His shoe size is 11 US.

Who did Tom Hiddleston play in Harry Potter?

Did Tom Hiddleston get married?