Updated On October 12, 2022 | Published By: shahid | In Affair , Dating , Relationship
Share this 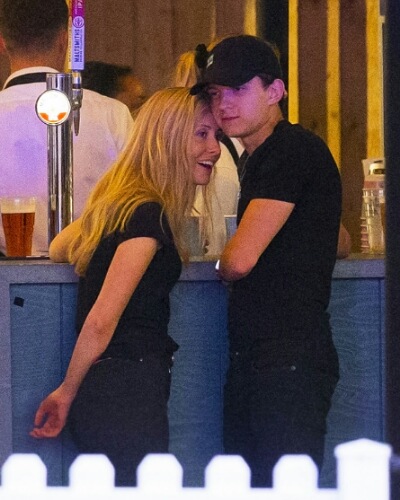 Update 2022: Tom Holland is presently dating her Spider-Man co-star, Zendaya. The two officially confirmed their romance via Instagram on Zendaya’s 25th birthday on the 1st of September last year.

Therefore, let us get into the details of it!

Actor Tom Holland is a highly talented and handsome person. His fans and viewers are curious to know about his love life. There was news that he is now in a romantic relationship with a mystery woman.

She was Olivia Bolton but before we could get more information about it, it is now learned that the couple has split. It was a brief relationship that lasted for only a couple of months.

“Tom and Olivia remain very close but decided recently it was best for them to be just friends rather than a couple,”

The two are no more a couple but it seems that the couple continues to remain friends.

The relationship between the couple-Tom and Olivia

Rumors about the relationship between Tom Holland and Olivia Bolton started circulating in July 2019. Fans came to know that Tom and Olivia met through their families.

At that time, a source had told The Sun:

“Tom and Olivia’s family have been friends for years, but it took some time for Tom and Olivia to realize the connection between them,”

“Tom’s been dogged with rumors about who he’s dating so finally being public with Olivia has been a massive relief for him. All their friends and family think they make a lovely couple. He is totally smitten.”

On learning about their relationship, the online fans started their research and found an old picture of the two when they were younger.

And just after two months of the relationship, they have broken up. Despite this separation, it is known that Tom is a committed man.

“I am definitely a relationship person. I’m not the fleeting type at all; it’s not my way of life.”

Earlier, Tom was rumored to be dating Zendaya. Though the couple never confirmed it, their fans were super-excited for them. They went to social network sites to talk about this rumored relationship.

And another of his fans tweeted a photo:

“Awww Zendaya and Tom Holland are the best couples ever.”

Awww Zendaya and Tom Holland are the best couple ever pic.twitter.com/LcDOR0olkX

And another fan remarked:

Just blessing your timeline with a Tom Holland and Zendaya pic🤗#SpiderManFarFromeHome pic.twitter.com/Th2RMqpR4y

Tom Holland and Zendaya really werent lying when they said Peter and MJ are the embodiment of awkward puppy love pic.twitter.com/7wjox7oYIe

Some wanted them to be a couple since if they are not dating they would be upset.

Zendaya and Tom Holland are my new otp. It’s been a minute since I’ve used that acronym, but they deserve it. https://t.co/USl03V4EWY

honestly…. i am so obsessed over them right now (@Zendaya @TomHolland1996) pic.twitter.com/KqSE6EGngy

“They started seeing each other while they were filming Spider-Man. They’ve been super careful to keep it private and out of the public eye, but they’ve gone on vacations with each other and try and spend as much time as possible with one another,”

A short bio on Tom Holland