Tom Hughes is an English actor, model, and musician and he is best known for his roles in the TV series ‘The Game’, ‘Victoria’, ‘Madame’ and in ‘Red Joan’. He is in a relationship. 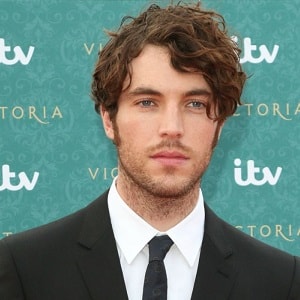 Tom Hughes is in a relationship. He has been dating actress Jenna Coleman since 2016. They first met while filming ‘Dancing on the Edge’ in 2013. They were together in the second series of ITV costume drama ‘Victoria’.

Previously, he dated Ophelia Lovibond but their relationship did not run smoothly and they got separated.

Who is Tom Hughes?

Tom Hughes is an English actor, model, and musician and he is best known for his roles in the TV series ‘The Game’, ‘Victoria’, ‘Madame’ and in ‘Red Joan’.

Nylon Magazine’s Young Hollywood Issue considered him as one of the 55 faces.

His mother is a musician. He holds British citizenship and his ethnicity is English.

He has done his schooling from his local high school and then he studied the Liverpool Everyman Youth Theatre group.

Hughes completed his graduation from the Royal Academy of Dramatic Art with a Bachelor of Arts in acting in 2008. He used to work for the indie band ‘Wuaintways’ and used to play guitar there.

Tom Hughes debuted his acting career from the series ‘Casualty1909’ in 2009.  He played the role in Ian Dury biopic ‘Sex and Drugs and Rock and Roll’ by the following year.

Moreover, he along with his father was a part of the band, Safehouse.

Tom also portrayed his role in the comedy movie ‘About Time’ in 2012. He has been playing the role of Prince Alberta alongside Peter Bowles, Catherine Flemming, and Daniela Holtz in highly rated TV series ‘Victoria’.

Hughes was nominated for BIFA Award for Most Promising Newcomer after he played in ‘Sweet Nothings’.

He has an estimated net worth of around $0.5 million and his main source of earnings are from his multiple professions like acting and modeling.

There was a rumor of the engagement between Colemon and Hughes because during the screening of ‘Victoria’, the lady was seen with a ring in her ring finger. But, later, she was seen without the ring in London. So, she may not have been engaged with him.

Tom Hughes has a height of 6 ft. 1 inch and his eyes are blue in color and his hair is dark brown. Other information about his body measurement is unavailable and it is under review.

To know more about Jordyn Taylor, Gary LeVox and Lane Toran, please click on the link.