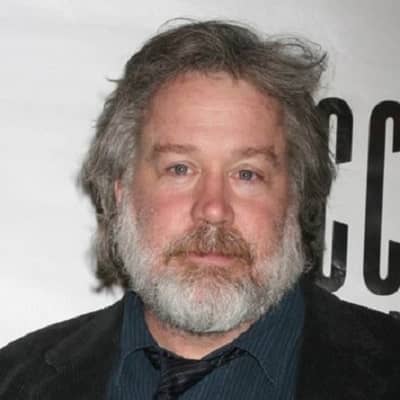 Here's the thing about Murray: he's not just a superb actor, he's a superb acting partner. Actor to actor, there was not a moment he was not with me.

That information--having a wife and child--is false. In the world of the internet, there are many falsehoods. Anyone can write stuff on Wikipedia and it doesn't have to be true. I'm comfortable being among the lists [of gay actors] although I stopped acting about 10 years ago.

Tom identified as openly gay in an interview with Seattle Gay News in 2008.

There were rumors spread about his marriage. Hulce denied it and hasn’t talked about any other relationships.

The producer may be living a single life or might be not disclosing his love life in the media.

Who is Tom Hulce?

Tom Hulce is an American actor, singer, theater producer. and entrepreneur. Although being four Golden Globe nominations, an Emmy Award, and a Tony Award winner in acting.

He retired from acting in the mid-1990s. After that, he focused his work on stage directing and producing.

Hulce was born on December 6, 1953, in Detroit, Michigan.  His is of English, German, Irish, and distant Dutch race.

Tom is the youngest one of the four children. He was interested in singing as a child and wanted to be a singer. However, he switched to acting after his voice changed in his teenage year.

Tom attended Interlochen Arts Academy. Then he studied at the North Carolina School of the Arts, but leave it a year before finishing his BFA.

Tom graduated with a BA from Beloit College in Wisconsin.

Hulce debut in acting in the year 1975 playing in Equus on Broadway. Throughout the late 1970s and the early 1980s, he worked in various theaters. The first film he worked on was  James Dean-influenced film September 30, 1955, in 1977.

In the early 1980s, Hulce was chosen to play the role of Mozart in director Miloš Forman’s film. In the year 1989, Hulce received the second Best Actor Golden Globe Award nomination for the 1988 movie Dominick and Eugene.

Talking about his movies, Hulce has appeared in Parenthood (1989), Fearless (1993) Mary Shelley’s Frankenstein (1994), Man(1988), and others. In 1990, he was nominated for his first Emmy Award for his performance in Murder in Mississippi.

In 1996, he even won an Emmy Award for his role in The Heidi Chronicles. The same year, he was cast in Disney’s animated film adaptation of The Hunchback of Notre Dame. He retired from acting in the mid-1990s, but was active behind the camera and had bit parts in the movies Stranger Than Fiction (2006) and Jumper (2008).

Hulce has also built his career as a producer. He has produced two major projects The Cider House Rules; and Talking Heads. The producer also works on the musical Ain’t Too Proud in 2017 which received 11 Tony Award nominations in 2019.

Hulce’s net worth is around $15 million as of 2021. The actor was on the No. 1 spot on People With Money’s top 10 highest-paid actors with an estimated $58 million in combined earnings.

The producer has launched his own brand of Vodka (Pure Wonderhulce – US). Moreover, he is all set to launch with a top-selling perfume ‘With Love from Tom’, and a fashion line called “Tom Hulce Seduction”.

Rumors of the Hulce’s alleged demise spread quickly all over the media just in July.

However, his death hoax dismissed since the actor is alive and well as of now.

Similarly, there was another news before that he married an Italian artist named Cecilia Ermini and also has a daughter named Anya. It resulted as a false rumor as Hulce denied it and opened himself as a gay in an interview in 2008.

Hulce is 5 feet 7 inches tall and weighs around 82 kg. He has grey colored hair with beautiful blue pair of eyes.

You may also read the bio of Lacey Adams, Chase Dillon, Thuso Mbedu, and Thuso Mbedu.