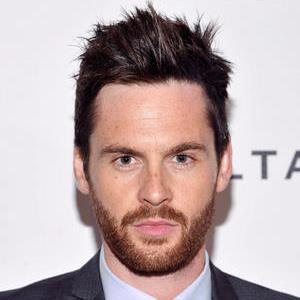 University was a chance to people-watch and to mix with people from all various walks of life, which as an actor is a great experience because you get to observe people

Even though Da Vinci was a genius, it's important to remember he was just a man.

Tom Riley and American actress Lizzy Caplan first met in January 2015 in London while Lizzy was shooting for a film.

Whereas, the couple started dating shortly after and made their relationship public by walking the red carpet at the Prague Opera Ball together as a couple in February 2016.

Moreover, Tom proposed to Lizzy in 2016 and the couple got engaged in New York and finally tied the knot on September 2, 2017.

Who is Tom Riley?

Tom Riley is an English actor, director, and producer. Likewise, he was most recently seen on television screens as DI Wagstaffe in ITV series Dark Heart. In fact, he can also be seen on the film festival circuit as Thomas in indie feature Ghost Light.

Moreover, he is also known for his appearance in the tv series named Monroe. However, he also featured the role of Freddie in the feature movie Happy Ever Afters.

Tom Riley was born in Maidstone, Kent, England on April 5, 1981, age (39). There is no information about his family and his childhood. It is under review.

There is no information about his siblings. He belongs to British-English nationality and his ethnicity is unknown. His birth sign is Aries.

On talking about his education, he graduated from the University of Birmingham in Birmingham, England in 2002 and the London Academy of Music and Dramatic Art in 2005.

Additionally, he was also involved in drama in his home town of Maidstone, Kent from the age of four and spent his school years writing and directing plays.

In addition, he set up a small theatre company (Article 19) with friends, and also had a radio show, while studying English Literature and Drama at Birmingham University.

He has received awards recognition for his stage and television performances. These include the best actor win in the 2014 BAFTA Cymru Awards, and an honorable mention in the 2014 Cablefax Awards, for his role as Leonardo da Vinci in Da Vinci’s Demons.

Whereas he received a nomination the 2011 Drama Desk Awards for his role as Septimus Hodge in Arcadia on Broadway, and a nomination in 2010 Off West End Theatre Awards.

Additionally, his other theatre credits include the 2011 world premiere of Stephen Poliakoff’s My City, numerous productions at the Royal Court Theatre, and the 2018 UK premiere of Sarah Burgess’ Dry Powder at the Hampstead Theatre.

There is no information regarding his income, salary. Whereas, his net worth is estimated to be around $ 12 million.

There was a rumor that Tom and Lizzy Caplan made their first red carpet appearance together as a couple at the Prague Opera Ball over the weekend. Currently, he is far from rumors and controversies.