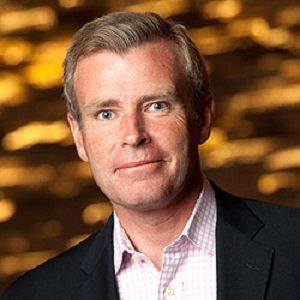 He is a single guy, so people sometimes relate him as a gay, but he has denied the rumor completely. So, he is not gay, rather he is a straight male, but unmarried. Media covered once about his dating and girlfriend scandal, with a beautiful lady. But they didn’t have much information about her because he remained meticulous about it.

So, he is probably single, and living happily with his family and friends and is mostly engaged in his career and works.

Who is Tom Rinaldi?

Tom Rinaldi is a reporter and journalist who hails from America. He is best recognized as a reporter for ESPN and ABC based in New York who has contributed to ESPN’s golf coverage, SportsCenter, Outside the Lines, College GameDay as well as Sunday NFL Countdown.

Tom Rinaldi has not given an insight into his date of birth till now. He is a Native American who grew up in Cresskill, New Jersey. His aim since childhood was to become a reporter. Surprisingly, he has not even revealed his parents’ identity till now. Similarly, not much is there regarding his early life and childhood.

He started working as a reporter for WNDU-TV in South Bend, Indiana from 1993 to 1996 and then worked at KATU-TV in Portland, Oregon from 1996 to 1998. Further, he joined CNN/SI, worked there for four years and later moved to ESPN, where he covered ESPN’s golf, College GamesDay, Sunday NFL Countdown, and SportsCenter and much more.

He conducted the first interview of Tiger woods on November 27, 2009, which led to Woods’ public disclosure of his extra-marital affairs. Likewise, he also was the first person to interview  Manti Te’o where he had been catfished. Also, he has won three Regional Emmy Awards, three Associated Press Awards and a USA Today Feature-of-the-Year Award.

Furthermore, he has also made huge amounts of money from other works such as web magazine writing. Moreover, he has also written pieces for ESPN ‘The Magazine’ and also for ESPN.com. Recently in the year of 2016, he published his first book, “The Red Bandanna,” the tales of 9-11 heroes Welles Crowther, which had previously been a Tom TV feature, and his book sold high amounts of copies.

Thus, with his exceptional reporting skills, he earns a decent amount of $200 thousand USD per year raising his net worth value to $1.5 million dollars.

At present, there are no rumors regarding his personal and professional life. it seems he is doing best job without harming others and he has seldom been involved in controversies of any sorts hence maintaining a good public image.

He is an average guy with a decent height of 5 feet and 10 inches. His hair color is light brown and his eyes are blue in color.  Also, there is no accurate information regarding his exact body weight and figure in detail.

Despite being a talented and reputed individual, he is not active on social media platforms like Facebook, Instagram, and Twitter. His fans and admirers are curious and eagerly waiting for him to be active in social media.