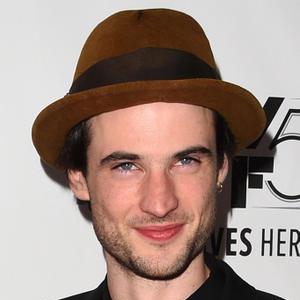 Do it, all the time. There's this weird thing about acting where you have to wait for somebody to ask you to do it

like you have to wait for a director to say it's okay. Like, fuck that, you should make plays, you should make films, do it with your friends, 'cause that's the only way you learn anything.

Previously, dated Sienna Miller, they got engaged in December 2011 and they have a child from this relationship, Marlowe Ottoline Layng Sturridge. But the relationship didn’t last long and they separated in 2015.

Who is Tom Sturridge?

As an English actor is known for appearing in the films ‘FairyTale: A True Story’, ‘Being Julia’, ‘Brothers of the Head’, ‘On the Road’, ‘Like Minds’, ‘Journey’s End’ and ‘The Boat That Rocked’. Likely, he also played the role of Carlo Marx in Walter Salles’s film adaptation of the Jack Kerouac novel On the Road.

Tom Sturridge was born in Lambeth, London, the United Kingdom on December 21, 1985. His birth name is Thomas Sidney Jerome Sturridge and he is currently 33 years old. His father’s name is Charles Sturridge (director) and his mother’s name is Phoebe Nicholls (actress).

Talking about his profession, Tom Sturridge first acted in the play ‘The Trial’. Then, he also appeared in the television adaptation of ‘Gulliver’s Travels’ in 1996. Likewise, he did the flick ‘FairyTale: A True Story’.

Similarly, in 2004, the actor did the movies ‘Vanity Fair’, ‘Being Julia’ and ‘A Waste of Shame’. Besides that, he was cast in the films ‘Brothers of the Head’, ‘Like Minds’ and ‘The Boat That Rocked’.

During 2010, Sturridge acted in the play ‘Punk Rock’. Later he played the roles of Will Donner and Danny in the films ‘Waiting for Forever’ and ‘Junkhearts’ respectively.

After this, he did the play ‘Wastwater’. Sturridge was also cast as Carlo Marx in the flick ‘On the Road’ in 2012. Additionally, he portrayed the character of Phillip in the play ‘Orphans’.

During 2015, the actor appeared in the flick ‘Remainder’ as well as in the play ‘American Buffalo’. On the following year, he acted in the television drama ‘The Hollow Crown’.

Talking about his awards, nomination, he was nominated for the Tony Award, Best Performance by an Actor in a Leading Role in a Play for his performance in the Broadway play Orphans. Unfortunately, he has not yet won any of the awards.

As sources have calculated, Tom has a net worth of around $3 million. Hence, he has earned this sum of money from his professional career only.

There was a rumor that Tom Sturridge kissed Sienna Miller for the first time during their Vienna trip. Currently, he is far from rumors and controversies.

Tom has a height of 5 feet 9 inches. Additionally, he weighs is 74Kg. In addition, his chest, waist, biceps sizes are 40-34-14 inches respectively. Tom’s hair color is black and his eye color is blue.

Also, read the affair, salary, the net worth, controversy, and the bio of Rufus Sewell, Daniel Sharman, Tom Riley