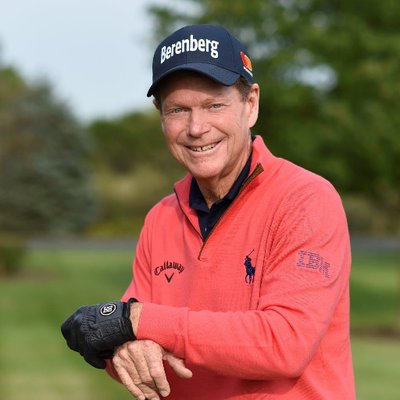 I was going right at the flag but with the uncertainty of links golf, maybe a gust of wind took it a bit further than it was supposed to. I felt extreme disappointment that night but the one good thing that came of that was the response of people around the world

I love this game. I feel that dedication is the only way to improve. I've been more consistent this year than in the previous three years

Sometimes you lose your desire through the years. Any golfer goes through that. When you play golf for a living, like anything in your life, you are never going to be constantly, at the top

Previously, he was married to Hilary Watson. They married in 1999. However, Hilary past away in 2019. Together, they have two children Michael and Meg Watson.

Prior to that, he was married to Linda Rubin. They were married in 1972 and parted their ways after 5 years.

Who is Tom Watson?

American Tom Waston is an award-winning professional golf player. Waston is renowned as one of the leading golf players in the world.

He is the five-time winner of The Open Championship.

Currently, he is the global ambassador for the open, GOLF’S ORIGINAL CHAMPIONSHIP.

Tom Watson was born Thomas Sturges Watson on the 4th of September 1949 in Kansas City, Missouri, USA. His father’s name is Ray Watson. He is of British-Scottish ancestry.

Watson attended The Pembroke-Country Day School, Kansas City. Later, in 1971, he graduated from Stanford University, California with Honors in psychology.

-1977, won Masters Championship. In the same year, he became victorious in the 1977 Open Championship at Turnberry. The finale of the Championship is considered one of the finest tournament matches of the 20th century.

– 1980, winner of the Third Open Championship in Britain with four strokes.

-1981, he earned the title of Second Master at  Augusta. The victory was followed by two more victories in the same year which include the USF&G New Orleans Open and the Atlanta Classic.

-1983, he defended his title as the U.S. Open champion winner at Oakmont.

-1987, compete at the Olympic Club and lose the tournament by a stroke to Scott Simpson.

-1989, he was a contender for the Open Championship at Royal Troon.

-1991, compete at Masters Tournament in Augusta.

-1994, contended for The Open Championship at Turnberry. However, he lost the tournament.

-2005, compete at the Open Championship against Jack Nicklaus.

-2009 and 2010, he was a contender of Open Championship in both consecutive years.

-July 2019, played at the final of the Senior British Open.

He has an estimated net worth of $25 million US. As a professional golf player, his earnings are in the range of $30k-$81k US.

His earning as a global ambassador are in the range of $21k-$54k US.

Some of his winning amount of tournament are