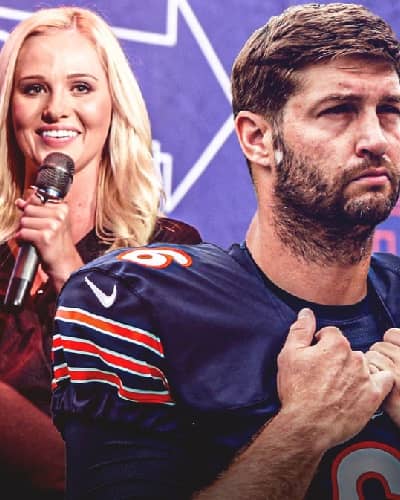 Jay Cutler seems to have moved on from Kristin Cavallari. Jay was spotted socializing at a Nashville bar with Tomi Lahren. There have been rumors going that they are moving towards a new romance.

On 3rd September 2020, one tweet gained 5k likes which read,

“Jay Cutler and Tomi Lahren are dating. She can rest easily that, if he tries to make a pass at another woman, it won’t get there. Geez, I crack myself up.”

As per the source, the two are having fun together but are companied by two other friends. They were passing a bottle of tequila back and forth and taking shots together directly from the bottle. They even left together but it is not clear whether they are just friends or the rumors started are actually true.

There have been many tweets made on whether Jay Cutler and Tomi Lahren are dating or not.

Jay Cutler and Kristin Cavallari started dating in 2009. It was Jay who made the first move but she was not interested in a relationship at the time. But a year later things turned in his favor.

She finally met him and hung out two nights later. They then began their romance and got engaged after an eight-month relationship.

Likewise, they engaged over an Easter weekend during a Mexican getaway. She was surprised by the proposal.

In 2011 Kristin told in an interview,

“Jay is a good Midwestern boy. He’s a gentleman. He opens up car doors and he did the laundry today, which I thought is pretty cool, so he’s a good boy. We’re in love!”

But nearly after three months of engagement, the two parted ways. They got together soon after and in 2012 they had their first child. Their son Camden Jack was born on 8th August 2012.

On 7th June 2013, Jay and Kristin walked down the aisle in a civil ceremony at the Woodmont Christian Church in Nashville in front of 150 friends and family.

In 2014, they welcomed another son Jaxon Wyatt Cutler. Again they added a new family member Saylor James on 23rd November in 2015. In 2020 they addressed the cheating rumors between Jay and Kristin’s best friend Kelly Henderson. Their relationship started falling apart and on 26th April 2020, Kristin revealed that they are getting a divorce.

The reason for their divorce is cited as inappropriate marital conduct and irreconcilable differences. Their divorce has not been finalized yet.

The American professional football quarterback Jay Cutler has an estimated net worth of $30 million. His salary is around $22.5 million. From the year 2014-2015 season, he was the highest-paid quarterback in the league. When he was traded to the Chicago Bears in 2009, he earned $54 million as a total.

Likewise, his rumored girlfriend Tomi Lahren has a net worth of $3 million. She hosted the television series On Point with Tomi Lahren for the One America News Network.

The house was built in 2014 and she bought it in 2020. Likewise, it is located in the trendy 12 South neighborhood just a 10-minute drive to downtown Nashville.

Jay Cutler is an American former professional football player. He is renowned for his offensive skills as a Quarterback.

During his professional life, he mostly played for the team, Chicago Bears. Read more bio…

A former television host and political operative, Tomi Lahren is also a brilliant conservating political commentator. Her show Tomi made her recognizable worldwide. She also hosted On Point with Tomi Lahren.

Lahren joined Fox News as a contributor in 2017 and is working for an organization that supports Donald Trump. Read more bio…