Tommy Lee Jones is an American actor and filmmaker. He has received four Academy Award nominations. 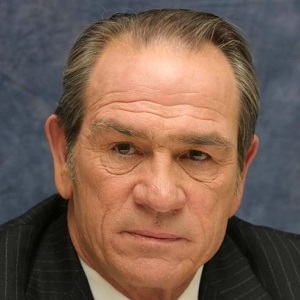 The quality of one's emotional life changes over the years, doesn't it? But the basic instincts and desires, greed and hope, seem to remain constant. In the larger scope of things, there's a sense of fulfillment to living a creative life. So I guess that's what keeps me going

Kindness and politeness are not overrated at all. They're underused

Partnerships are good engines for narrative.

While coming to the personal life of Tommy Lee Jones, he is a married person. He was married to an actress/writer Katherine Lardner in the early 1970s. After several years of relation, they had got divorced.

Then in 1981 he again married Kimberlea Cloughley, on the Texas set of Back Roads. The couples were blessed with two children, Austin and Victoria. But this time again he got separated from his second wife.

In March 2001, Jones married his longtime girlfriend, photographer Dawn Laurel. The couple met on the sets of the 1995 TV movie The Good Old Boys, which Jones directed.

Who is Tommy Lee Jones?

Tommy Lee Jones is an American actor as well as a filmmaker. He had also received four Academy Award nominations, winning Best Supporting Actor for his performance in 1993.

The great actor Tommy was born on September 15, 1946, in San Saba, Texas. He is only the child of Lucille Marie and Clyde Jones. His ethnicity is Mixed (Scots-Irish/Northern Irish, Scottish, and Dutch) and his nationality is American.

He operated the thriller Under Siege—starring Steven Seagal and directed by Andrew Davis in 1992. Next year, he starred in three more huge box-office hits Stone’s Natural Born Killers, The Client and Blown Away, and several less successful features. In 1995, he starred as the cartoonish villain Two-Face alongside Val Kilmer and Jim Carrey in the critically drubbed.

His next box-office triumph was the 1997 science fiction action-comedy Men in Black, a summer blockbuster co-starring Will Smith. Similarly, he had many projects like Volcano in 1997, the animated Small Soldiers in 1998,  and  Double Jeopardy in 1999. In 2000 he again had success at the box office as a lawyer fighting to defend a Marine colonel, played by Samuel L. Jackson, in the courtroom drama Rules of Engagement.

In 2007, he roared back into prominence playing Sheriff Ed Tom Bell in No Country For Old Men, which won the Academy Award for best picture. In 2008, he had filed a suit against Paramount Pictures, claiming that the studio owed him more than $10 million.

Then in 2010, he appeared in the drama The Company Men with Ben Affleck and Chris Cooper. Followed in 2012 he had returned to his most popular film franchise, reteaming with Will Smith for Men in Black 3. He had also played two famous historical figures.

He has a net worth of $85 million but his salary is not revealed yet.

Like other celebrities, Tommy Jones has also suffered from rumors and controversy. His rumors were that were still alive began circulating immediately upon his death.

The government recently released formerly classified reports by Mexican Police that Tommy Lee Jones walked on to a 1999 crime scene in Mexico City, claimed jurisdiction, and then demanded that everyone else immediately “shut the fuck up” and leave.

His appearance in the academy award-winning 2005 film Man of the House, has raised further speculation of his livelihood.

Tommy Lee Jones has a height of 6 feet with a bodyweight of 91 kg. His hair color is salt and pepper and his eye color is brown. There is no information about his shoe size.

Did Tommy Lee Jones pass away?

Are Will Smith and Tommy Lee Jones friends?