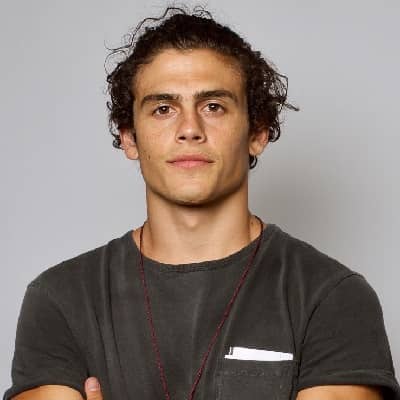 Tommy is in a relationship with Adeline Rudolph. She is also an actress and is popular for playing as the Weird Sister, Agatha, from Netflix’s Chilling Adventures of Sabrina.

The details about their dating history are not known. However, they made their relationship on an Instagram official in December 2018.

The couple made their red carpet debut as a couple at the premiere of Good Trouble.

Who is Tommy Martinez?

Tommy Martinez is an American model as well as a TV and movie actor.

Martinez was born on  March 20, 1992, in Venezuela. He is of American nationality and has English descent.

Likely, his mother’s name is Erika Abudei. Martinez’s family moved from Venezuela to Florida when he was four years old.

Martinez completed his schooling in his hometown. He studied college in Tallahassee. However, he dropped out and proceed to Los Angeles to build his acting career.

The actor dropped out of college to pursue his acting career. He played in various short films in his initial days. Martinez was also into modeling and spend took two years in modeling. He was featured in Abercrombie and Fitch ad campaigns.

Likely, Martinez also worked as a waiter in a restaurant while he was modeling. Later he got a call from his agent and get into the acting field. He started acting professionally in the year 2017 when he got a role in an episode of Shameless.

He then was cast as Malachai in the Netflix series CW’s Riverdale. It was cast from 2017 to 2018. Martinez then came into the limelight. The next year, Martinez portrayed as Gael Martinez in Freeform’s Good Trouble.

The star has maintained a lowkey profile and doesn’t involve in any such type of rumors and controversial news. He is now more focused on building his career right now.

You may also read the bio of Max Walker, Matt Cornett, Joshua Bassett, and John Finn.

Renee Olstead Married with Pianist!! Is she having a baby??