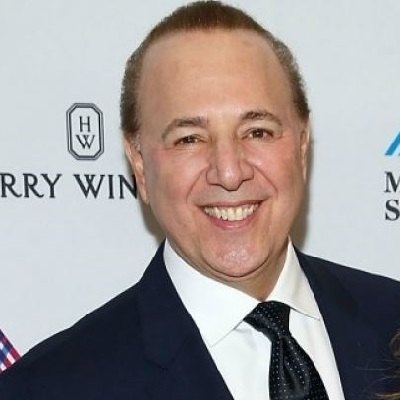 Tommy Mottola is married to Ariadna Thalía Sodi Miranda Mottola (a.ka Thalía). His wife is a Mexican singer and actress by profession.

The couple married on the 2nd of December 2000 at St. Patrick’s Cathedral in New York.

The couple is blessed with two children including a daughter, Sabrina (Born: in October 2007), and a son, Matthew (born: June 2011).

Before that, he was married to Mariah Carey on the 5th of June 1993. His ex-wife, Carey is a famous singer and songwriter. The former couple started dating in the early ’90s. At the time, they were working in the multi-platinum certified album, Music Box.

On the 30th of May 1997, the couple made an announcement of getting separated. Later, on the 5th of March 1998, they got divorced from each other.

Before that, he was married to Lisa Clark in 1971. To marry Lisa, he converted to Judaism. They got separated from each other via divorce in 1990. Together, they have two children; Michael and Sarah.

Who is Tommy Mottola?

American Tommy Mottola is a legendary persona in the music industry. He is renowned as the former chairman and CEO of Sony Music Entertainment.

Currently, he serving as the chairman of Mottola Media Group.

Tommy Mottola was born on the 14th of July 1949 in The Bronx, New York to a middle-class family. He is of southern Italian ethnicity.

His parents Thomas Mottola Sr. (father) and Penny Bonetti (mother) moved to New Rochelle from The Bronx. At the time, he was still a child. She has three sisters; Joan, Jean, and Mary Ann Mottola.

Talking about his educational background, he is a graduate of Lona Grammer School. Later, in 1966, he graduated from Lona Prep School. After that, he joined the military school for some time interval.

Moving forward, he got enrolled at Hofstra University on Long Island. However, he dropped off from the university to pursue his career as the music industry. At the time, he used to sing and play the guitar of an R&B cover band, The Exotics.

In 1988, Tommy Mottola joined Sony Music for handling US operations. Two years later, he became the chairperson of the company. As a chairperson, he made the company as global success expanding it in more than 60 countries.

He was associated with the company for more than 15 years. In the time interval, he signed various global music icons including Celine Dion, Gloria Estefan, and Mariah Carey.

Also, he worked with Michael Jackson’s eighth studio album, Dangerous. The album reached the 2nd position in the yearly chart of US Billboard. Also, the album received 8X platinum by RIAA.

In June 2003, he left Sony Music Entertainment as the head. After that, he built his own entertainment company, Mottola Media Group. The media group works in music recording, TV Production, branding, and management.

Through the media group, he has launched the artist including Marc Anthony and Lindsay Lohan. Also, he signed Cassie Ventura and Mika too. Last, in 2018, the media house signed a multiyear deal with eOne for developing scripted and unscripted TV shows.

He is one of the wealthiest personalities in the music industry. As of 2020, he has an estimated net worth of $540 million. As a chairperson of Mottola Media Group, his earnings are in the range of $54k to $570k. Besides that, he also makes his other business ventures too.

Back in 2000, he raised the annual income of the company from $800 million per year to $6 billion. In 2010, he and his wife, Thalia brought an undeveloped 6-acre parcel of land in Greenwich worth $2.85 million.

Till the date, he has managed to maintain his dignity as a music personality. As of now, he has not been involved in any sort of controversy and scandals that created a buzz in the media.

Tommy Mottola has brown eyes with brunette hair. His height is 5 feet 8 inches and has a decent weight.

You may also read the bio of Damaris Lopez, Toni Pirosa, and Delores Winans.