Internet star Tommy Unold is low-key about his love affair.

Talking about his personal life, he’s not dating anybody, and at the moment he’s single. He has not publicly disclosed his relationship past.

He may have met someone earlier, but so far he hasn’t come out to the public. He is living his single life to the fullest, though.

Moreover, he has a quiet attitude, but he’s kept his love life down in profile and out of media interest. 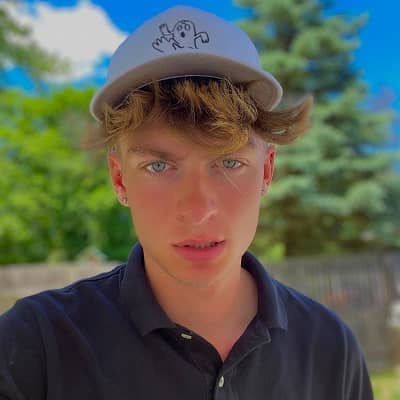 Who is Tommy Unold?

Tommy Unold was born in California, USA, on June 1st, 2001. He is 21 years old at the moment and Gemini is his zodiac sign. His mom has made appearances in his early TikTok videos.

He’s very connected to his dad. As a result, he once put a picture of him on his Instagram account, in which he was seen playing golf with him wishing him “Happy Father’s Day.”

Tommy’s got a younger sister named Ally Unold. But he didn’t share the names of his parent. Yet he spent much of his youth in Michigan.

With respect to his education, he attended high school in Mattawan and played basketball there. In addition, he participated in the adaptation of the TV show Get Smart for a school production. On May 25, 2019, he graduated and shared a photo on his Instagram with his friend.

Tommy is the content creator of TikTok, who became popular for his humorous public interview videos. Most of his videos started to gain hundreds of thousands of likes per post, and he’s earned over 8 million followers.  He has reached 10 million TikTok likes in May 2019.

In May 2020, he published a compilation video entitled “Ask Girls How Attractive I Am” that won over 3 million views.

In addition, he used the original sound of Nathan Evan for the comedy TikTok video he called “3 types of cheaters.”

His fans enjoy his comedy and acting. Tommy is now planning to enter the world of modeling and is also getting a range of deals from several brands.

He also has a YouTube channel called ‘TommyUnold.’ Tommy set up his channel on May 17, 2019. He hasn’t posted a lot of videos to it.

However, he’s doing his hardest to be simultaneously involved on every social media site. He’s working to make more videos, and he’s still always uploading videos on YouTube.

Likewise, some of the most popular YouTube videos on his channel are ‘ASKING MOMS IF IM ATTRACTIVE! ‘,’ How to get a girlfriend! ‘,’ How to make the TikTok get FAMOUS in a week! *1 Million fans are so Quick! *’, ‘Reading my DMs,’ ‘Does Size Matter?’ W/Durte Dom, ‘Backpack’ Kid ‘Flossin’ Lyric and Meaning *REMAKE’ and much more.

He’s probably likely to pocket a decent sum of money from his social media profession. His projected net valuation for 2020 is about $1 million – $5 million.

In addition, Tommy is also focused on his merchandise line. He launched some T-shirts, sweatshirts, and a lot more for his fans to purchase.

Similarly, until now, he has never been targeted with any sort of rumors and controversy.

He’s kept his profile pretty awesome. So, as of now, he’s out of the dating gossip and he’s pretty focused on his work.

Tommy is a tall man with a wonderful personality. He is 5 foot 11 inches tall and weighs around 65 kg.

In comparison, the size of his shoe is 11 (UK). He also has brown hair and hazel eyes. His other body measurements have not been disclosed.

In the same way, he has a great physique, and he has maintained a balanced body.

Besides TikTok, he’s quite popular on other social platforms.

Tommy has received over 467K followers on the Instagram account at ‘@tommyunold.’ He is also active on Twitter with more than 2K followers and is not as popular as other social media sites.