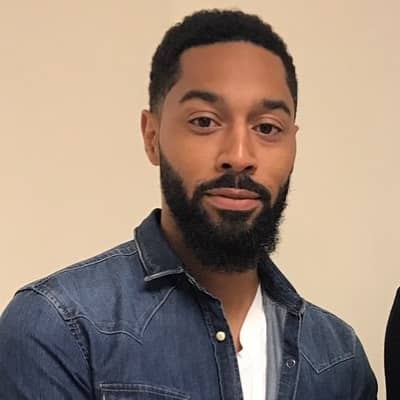 Tone Bell currently appears to be single. He hasn’t introduced anyone as his girlfriend or lover.

However, there is a rumor that he is dating his on-screen lover The Vampire Diaries alum, Nina Dobrev on the surface of the Internet.

But the pair hasn’t yet commented on this news so, without confirmation, it is not sure that the pair are in a relationship. In further days, if the duo shared anything regarding their relationship then we will update it.

Who is Tone Bell?

The actor was born on the 10th of August in 1983, in Decatur, Georgia, the U.S. His full name is Michael Anthoney Bell II. He holds an American nationality and is of All-American descent.

The name of his parents is Mike Bell and Val Bell. Bell never mentioned his siblings so it seems like he is the only child of his parents.

Moving towards his academics, he completed his education at the local Savannah State University. Before coming out in the entertainment industry he worked as a brand manager in Awivel Media for a year in San Francisco.

Afterward, he worked in the production of a beer company from where he transferred to Dallas and he eventually started doing open-mics at various comedy clubs.

After performing in the various comedy clubs Tone participate in the 2012 NBC Stand Up For Diversity Talent Search and was awarded a development deal from the network.

In the same year, he was cast in an American comedy-drama television series, Single Ladies in the role of Parker. Afterward, he was cast as RJ the bartender in the NBC sitcom Whitney.

In 2014, Bell was cast in the main role of Bad Judge portraying the role of Tedward Mulray from 2014 to 2015. Similarly, he is also the main cast of Truth Be Told alongside Mark-Paul Gosselaar, Vanessa Lachey, and Bresha Webb.

Lately, he starred in the 2021 biographical film, The United States vs. Billie Holiday based on singer Billie Holiday where he portrayed the role of John Levy.

Some of his notable film and television series are mention below in the table,

To date, Bell has managed to maintain his clean image. He has not been part of any sorts of controversial acts and disputes that create headlines in the media.

As per other online sources, Bell has an estimated net worth of around $2 million as of 2021. Likely, he earned around $700 thousand per year. Furthermore, his other assets, salary, and real estate are still under review.

The actor stands at the height of 5 feet 10 inches tall and her weight is around 71 kg. He has a black pair of eyes with black hair color as well. Further, his other body measurement is not available.

Similarly, he has over 45k followers on his Facebook page. Also, he shared his e-mail id [email protected] for business inquiries.

John Cena and Fiancee Nikki Bella Celebrating Bella’s YouTube Milestone by Getting naked!!Jone Cena: ‘My Tube’s on YouTube!’…Enjoy the ride!